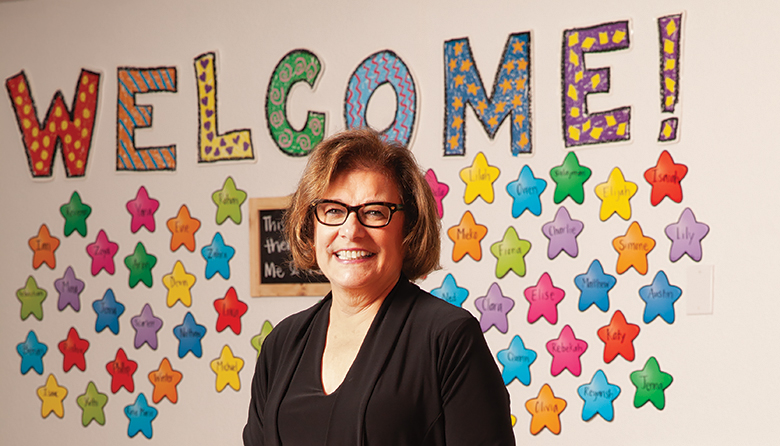 A LOT OF CARE. Mimi Siegel, executive director of Kindering, has been with the organization for more than 40 years.

This article appears in print in the November 2018 issue. See more about the winners of the 2018 Community Impact Awards here. Click here for a free subscription.

Established in 1962, Kindering is a nonprofit early-intervention center that provides therapies and education to children with developmental delays and disabilities, such as autism, cerebral palsy and Down syndrome. Kindering targets the most developmentally critical early years when 85 percent of brain growth occurs.

The organization was founded by five young mothers, all of children with disabilities, says Executive Director Mimi Siegel, who has been with the organization for the past 40 years. Its very much a grass-roots organization that has stayed true to its mission but evolved over 50-some years.”

Siegel notes that in addition to the core services of special education, physical, occupational and speech therapies as well as feeding teams for young children failing to thrive, the organization focused its efforts on the importance of family early on. We really were the first organization nationally to develop a program for fathers of children with special needs and for siblings, because siblings are your longest chronological relationship, says Siegel.

The organization also does outreach to families at risk. That could be children in foster care. … It can be families who are homeless or in transitional housing, [or] newly arrived immigrants who dont yet have English language skills and are struggling with poverty, Siegel explains.

Kindering helps 4,500 families each year, regardless of their ability to pay. Ninety-nine percent of Kindering children make measurable progress. Seventy-five percent narrow the gap with their typically developing peers, and 46 percent no longer require special education services by age 3. Seattle Foundation is one of the largest community foundations in the United States and manages more than $1 billion in assets. In 2017, the foundation invested nearly $100 million in grants across the spectrum of community needs.

We were established in 1946 by Richard Fuller and 14 other leaders to create an endowment for the community, says President and CEO Tony Mestres. It seeded the development of important community institutions, [such as] Pacific Science Center, Overlake and Swedish hospitals, YMCAs Camp Orkila and others. It also incubated some amazing initiatives that are now independent, impactful entities in and of themselves, like Washington Womens Foundation, Social Venture Partners and our GiveBIG effort to encourage philanthropy by the broad citizenry.

In an effort to advance equity and opportunity in Greater Seattle, the foundation places a strong emphasis on ensuring that people from underrepresented communities are heard and seen. Through its Vibrant Democracy Initiative, for example, the foundation helps increase democratic participation and voter registration in marginalized communities.

The Vibrant Democracy Initiative is one of the most innovative, thoughtful and critical efforts in our time, Mestres declares. [For] our democracy to truly work and be representative of all, and in many cases of those most deserving of support and opportunity, we actually have to hear those voices. And that includes a partnership with King County Elections aimed at increasing the civic participation of traditionally underrepresented communities. … Without efforts like this, we find that those who are most deserving of our democracys support are often either under-heard or silenced.