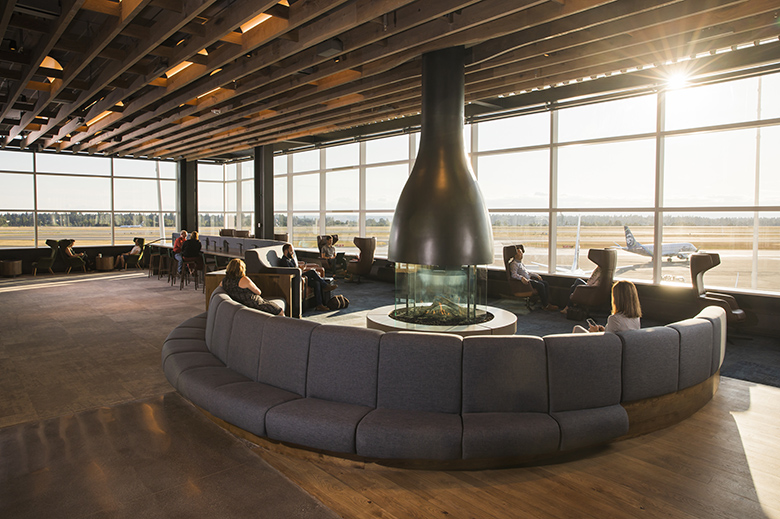 The renovation and expansion of the 45-year-old facility will increase the facilitys footprint by 255,000 square feet to the west; expand the number of gates from 12 to 20; double the dining and retail space, along with adding the new lounge as well as a new nursing suite for traveling mothers.

The entire renovation is slated to be completed by mid-2021. Existing operations at the North Satellite facility will be transitioned to the newly renovated space by the end of the month and the original 12 gates will be closed for upgrading over the next two years.

Funding for the $658.3 million renovation comes from several sources, including airline fees, the Airport Development Fund and Passenger Facility Charge revenue. The Alaska Airlines Lounge and employee spaces that are part of the expansion are being funded by Alaska Airlines to the tune of $41 million. The lounge, the airlines third and largest at its Sea-Tac hub, will be open to Alaska first-class travelers or via a lounge membership, with day passes available.

Alaska recently completed renovations of its lounges in Los Angeles; Portland, Oregon; and Anchorage, Alaska. In addition, last year it opened a new lounge at New Yorks JFK airport and plans to unveil a new lounge at San Francisco International Airport next year.

The expansion of the North Satellite facility is part of a slate of projects Sea-Tac has planned or underway to cope with increasing passenger volume at the airport, which served nearly 50 million passengers last year, up 6.2% from 2017.

Currently, were at more than 100 projects [underway or in the pipeline] at [a cost of] $3.7 billion in the next five years, says Perry Cooper, a spokesman for the Port of Seattle, which oversees Sea-Tac. That doesnt include projects under consideration as part of the Sea-Tacs Sustainable Airport Master Plan, which is currently under environmental review and includes some 30 projects slated to be completed or under construction by 2027 including a new 19-gate airport terminal.

Over the five-year period ending in 2018, commercial airline passenger traffic at Sea-Tac jumped from 34.8 million to 49.8 million flyers a 43% increase. That same rate of growth over the next five years would catapult traffic at Sea-Tac, now the nations eighth-busiest airport, to more than 71 million passengers. The Port of Seattle offers a more conservative (though still daunting) estimate, putting the annual passenger count at 66 million by 2034.