VR developers receive space to work and in turn get a chance to 'play test' their products. 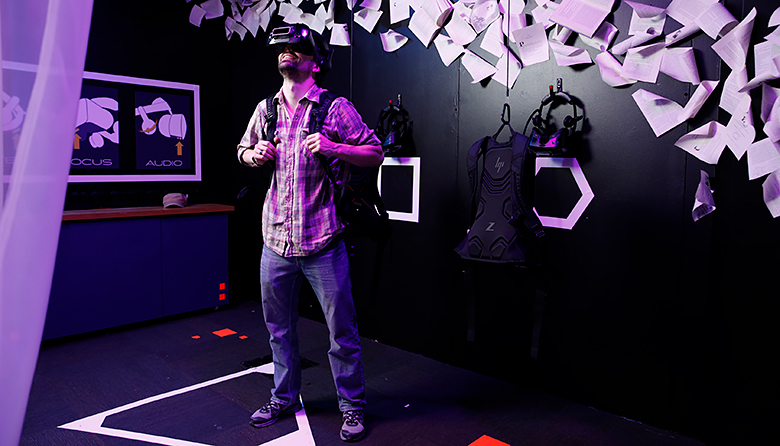 The Pacific Science Center has some of the resources especially workspace that bootstrapping virtual-reality developers dream of. A year and a half ago, executives at the center saw this opportunity and launched What is Reality?, an experiment in which selected VR developers receive space at the science center in exchange for a commitment to educate the public.

We wanted to create this sort of community living room and laboratory, says Diana Johns, VP for exhibits. We took our traveling exhibit hall where we last had Terracotta Warriors and we sort of turned that into an experimental space, or an incubator.”

The idea is to give VR developers space to work and, in some cases, access to other resources, such as the science centers woodworking shop and the developers in turn open their doors to the public part of the time.

We had been looking to build large-scale experiences, says Jeff Ludwyck, founder of Hyperspace XR, a company that is building a backpack-borne VR platform allowing people to move and experience not just visual effects but also touch and smells. Obviously, for a startup looking to build large-scale experience, the biggest challenge is real estate. Most startups you can start in a garage, but for this you really need a wide-open space.

The company moved into a 3,000-square-foot space at the science center in November 2017 and since early 2018 has been play testing its technology with science center visitors. Were open with guest hours every day, talking with guests about what were doing, says Ludwyck. Its been an awesome relationship.

The science center has since brought in two other companies: Curio Interactive, which is developing VR-based products to engage children with science, and Peeka, which uses VR to bring childrens books to life. Our doors are open, says Johns. If somebodys working on a product that is family friendly and they want to get in front of play testers, were the best place for them to do that.