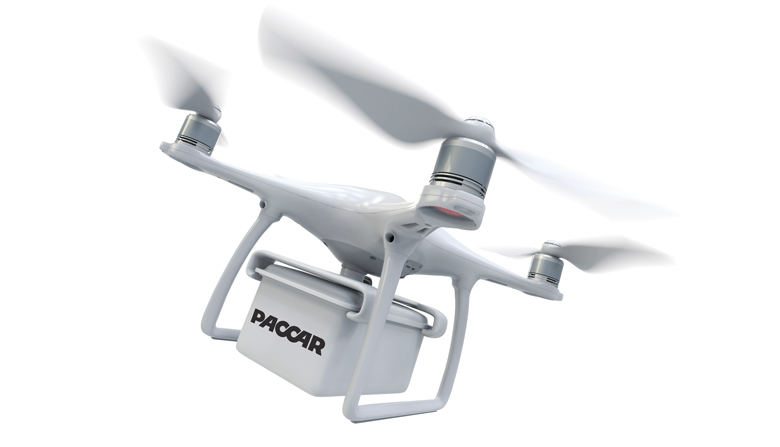 A truck breaks down by the side of the highway. The mobile-repair mechanic has been dispatched to the scene, but he needs one crucial part to get the truck running again, one he didnt bring with him.

No problem. Just send an aerial drone with the part to the scene. No long delays waiting for part delivery. No towing the truck a long distance for repairs.

If that scenario sounds like another of the daily maybe someday flights of fantasy people are having about the use of unmanned aerial vehicles, thats understandable. But at least one company thinks the idea is realistic enough and near enough to have experimented with it and publicly acknowledge its doing so.

That company is Paccar Inc., the Bellevue-based parent of the Kenworth, Peterbilt and DAF truck nameplates. At its annual shareholders meeting, held in its 160,000 Paccar Parts distribution center in Renton, Paccar offered a display on its experiments with delivering parts by drone, and a video showing how it might work.

A standard multirotor drone (small enough to sit on a desktop) is outfitted with a plastic tub into which parts are loaded.

The Renton parts warehouse is full of truck components like axles that would overwhelm most drones for size and bulkiness, which would seem to render the entire idea impractical. But Paccar says most of the parts it stocks actually weigh less than 20 pounds, the lifting capacity of that small drone.

The holdup in deploying the technology is the Federal Aviation Administration regulations requiring drones to operate within the remote pilots line of sight. That blocks delivery by drone, a technology Amazon and others are keenly interested in.

But the FAA has authorized tests of drone operation beyond line of sight, such as inspecting railroad rights of way in remote locations, an indication that its considering the next stages of drone-technology applications.

Paccar CEO Ron Armstrong says the pace of development in pilotless technologies appears to be accelerating, making it imperative for companies like Paccar to be prepared for the day when regulators open the skies to remotely operated aircraft. Its not something were doing every day, he says, but were experimenting with it so we know the technology, we know the capability and in the event that it starts to make some sense, well be ready when its there.