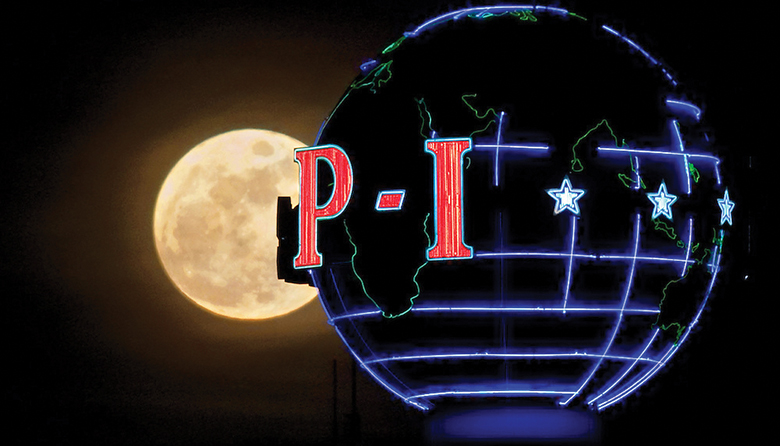 Ten years after the print edition of the Seattle Post-Intelligencer passed into oblivion, the P-I globe persists, albeit in a diminished capacity. The girdle around its equator, sporting the brash Its in the P-I slogan, no longer rotates. And its hit-or-miss neon lighting desperately needs a refresh.

But the globe is still illuminated most nights. Hearst Corporation, parent of the surviving online entity, SeattlePI.com, still pays rent and electricity. And the globe remains a quintessential Seattle symbol even if newcomers not steeped in local lore remain oblivious to its history.

In some ways, its a good-news story, says Leonard Garfield, executive director of Seattles Museum of History and Industry (MOHAI). Its impressive that the globe has demonstrated an endurance surpassing print media.
Still, its future remains unclear. MOHAI has owned rights to the globe since 2012, when Hearst donated it after Seattles Historic Preservation Board designated the globe a city landmark.

MOHAI and Hearst have discussed the cost of refurbishing and moving the globe from its perch on Elliott, but nothing appears imminent.

We continue to talk with Hearst, Garfield says, but we dont have anything to report.

The fact that neither side is willing or able to say more seems odd, as if maybe something is afoot and they dont want to divulge too much too soon. Its also unclear if Credit Suisse, which owns the former Post-Intelligencer Building at 101 Elliott Ave. W, is OK with letting the globe stay on the roof indefinitely. Credit Suisse spokesperson Candice Sun would only say, We decline to comment.

Two possible sites, assuming the city approves, are Myrtle Edwards Park along the Elliott Bay waterfront, directly across the railroad tracks from the P-I Building, and Lake Union Park, where MOHAI is situated. The bigger challenge right now, Garfield notes, is ongoing maintenance and stewardship. It uses a lot of electricity.

Garfield says he cant speculate on when or whether talks with Hearst might bear fruit. Nor will Hearst say anything more. Meanwhile, SeattlePI.com which employs about a dozen people at an office two blocks away in lower Queen Anne still uses the globe in its branding, which at least suggests the possibility Hearst will keep the lights on.

But for how long?