Seattle Is Using Public Transit More Than Ever

Nearly twice as many people are taking public transit to work than driving alone, and overall use has grown significantly in the last seven years. 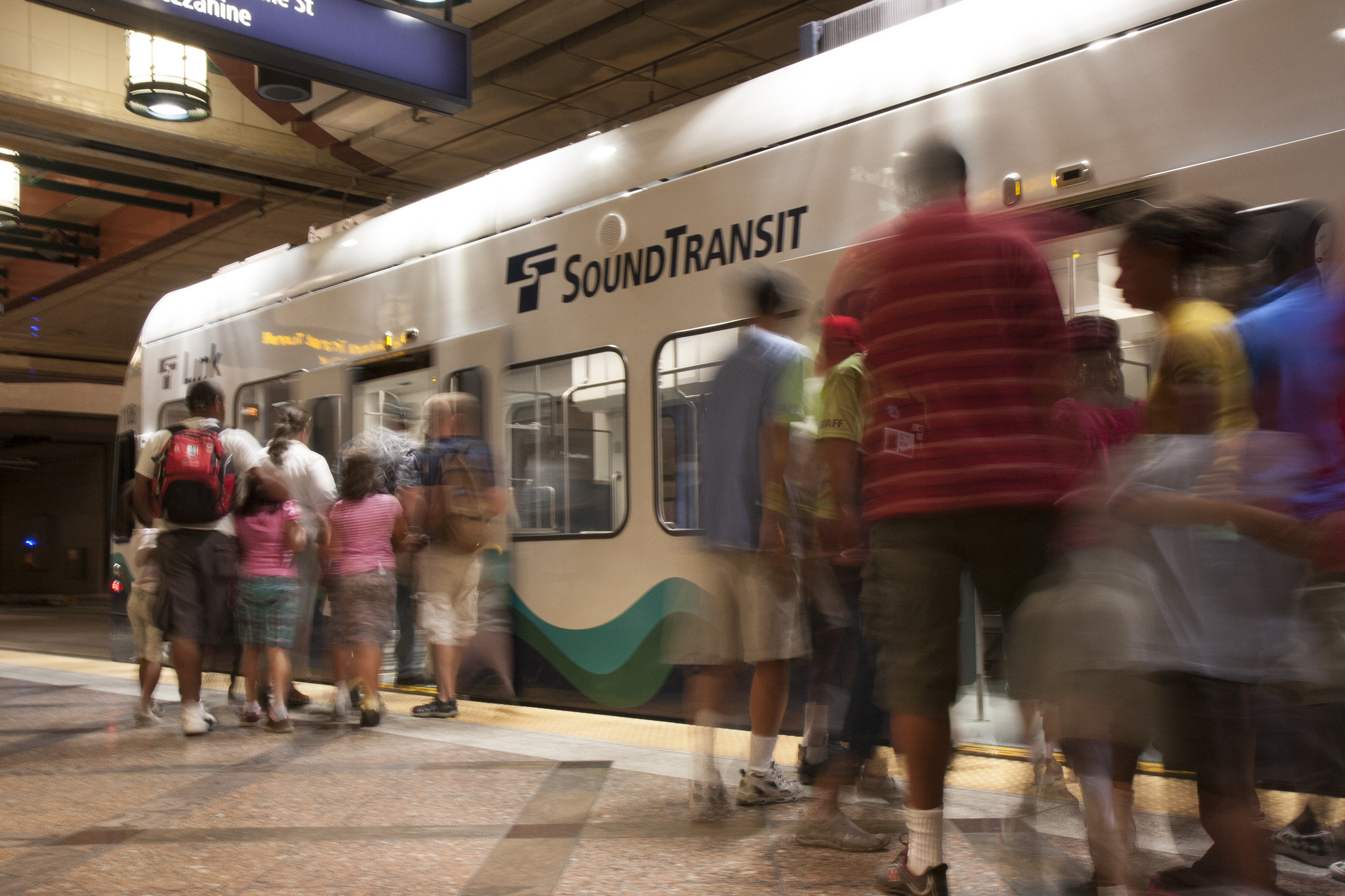 Public transit is booming in Seattle, and the number of commuters driving alone is down to a record low.

We have NEVER recorded a faster transition to transit, walking, biking, car/vanpooling and telecommuting from those driving alone than in this survey, released today, tweeted Commute Seattle, Downtown Seattle’s Transportation Management Association, and a partner in the survey.

Commuting by bus is by far the most popular mode of transit,at 36.9 percent, and train/light rail/streetcar is third at 9 percent.

That 48 percent number also seen elsewhere in the study, as one of the highlights in the growth of public transit in the region is its 48 percent increase in use over the last seven years. Conversely, single occupancy vehicle (SOV) commutes are down nine percent in the last year alone.

The study says that the share of light rail and Sounder trips has more than doubled since 2010, with the greatest increases occurring since the opening of the U-Link and Angle Lake light rail expansions in 2016.” The chart below shows that change both for commuters at larger Center City businesses affected by the State of Washingtons Commute Trip Reduction (CTR) Efficiency Act, and those not affected.

Commute Seattle also referenced the virtuous cycle that leads to better public transit in the city.

Looking ahead at whats to come for transit in the region for the next 20-plus years? See our recent infographic on the Transportation 2040 plan. PLUS: See our April 2016 cover story on transit-oriented development in the region, and see that full issue here.

See the full results of the survey, including many more charts here, and read the full press release below.

Nearly Half of Daily Commuters Rely on Transit; Single Occupancy Drivers Down 9% in the Last Year

SEATTLE (Feb 13) With nearly half of commuters relying on transit for their daily commute, new survey results released today by the Seattle Department of Transportation and partners at Commute Seattle show that in Seattle more commuters are relying on transit, walking, rideshare, and biking. Public transit (bus, light rail, streetcar and train) remains the top choice for downtown commuters (48%), with ridesharing (carpool, vanpool) holding steady at (10%), walking (8%), bicycling (3%) and teleworking (6%).

According to the 2017 Center City Modesplit Survey, transit use has skyrocketed by 41,500 in the last seven years in downtown Seattle during the peak morning rush hour. Walking, biking, and rideshare, including carpool, saw gains of thousands of trips per day. Conversely, the percent of commuters driving alone has fallen to 66,500 single occupancy vehicles – the lowest rate since this survey began tracking trends in 2010 and a reduction of nine percent over the last year.

Transit works, and we need more of it as quickly as possible. From working with employers to increase telecommuting to speeding up light rail, we can expand our transportation options that make it easier and safer for Seattle residents to get around, said Seattle Mayor Jenny Durkan. With our exponential growth in the last decade, theres no doubt that traffic is worse than ever for too many of our residents, commuters and families, and in the next few years, downtown construction will exacerbate our traffic woes. However, we have a unique opportunity in this time to reshape our transportation downtown for decades to come especially at a time that more commuters are choosing to use our dependable transit system.

Fewer people driving alone helps us achieve our ambitious climate goals, and grow our region sustainably, said King County Executive Dow Constantine. These results continue to show that transit is the backbone for connecting workers with the states largest job center. People wanted more bus and light rail options, and we delivered. More service means more riders, and we will continue to make improvements to make it even easier to get downtown, and across the region.

Riders see the real progress weve made adding buses and improving reliability across the regions transit network, and our menu of mobility options continues to grow, said King County Metro General Manager Rob Gannon. Whether its through frequent bus service every 10 minutes, or community shuttles, carpools and vanpools, we offer the easy and convenient travel options riders want.

Sound Transits recent expansions seem to be having a significant effect. This shows the importance of creating more benefits across the entire region, thereby providing congestion relief and more options for commuters, said Dave Somers, Sound Transit Board Chair and Snohomish County Executive. The quality of life of our residents and our economy are being compromised by ever-worsening traffic. We must complete the spine as quickly as possible, bringing greater transportation choices to people from Everett to Tacoma and Seattle to Bellevue.

Were committed to giving commuters options. The rapid growth in the city, especially in downtown Seattle, requires us to be more innovative about how we move people, whether they drive, ride transit, bike, or walk. The surveys results show that our continued investments in transit are paying off. Were excited to continue our partnership with Commute Seattle and others so that were developing ways for everyone to move in, around and near Seattle easily and affordably, said Andrew Glass Hastings, Seattle Department of Transportation Director of Transit and Mobility.

Downtown Seattle has added thousands of jobs over the past decade; infrastructure improvements and private development are both occurring at a fast space. But we are adaptable. Downtown Seattle commuters are embracing smart mobility options during a period of tremendous growth, said Commute Seattle Executive Director Jonathan Hopkins.

Seattle is one of the fastest-growing cities in the country, with record numbers of people working and living in downtown. Recent investments in light rail and bus service — as well as other infrastructure improvements — are paying off, said DSA President and CEO Jon Scholes. With more improvements on the way well have a robust network with more options to get into and through downtown.

The Center City Modesplit report is typically released by the City and partners at Commute Seattle every two years; however, SDOT funded additional data collection this year both to better track downtown trends as well as better align data collection. Approximately 55,000 surveys are gathered in the Center City via SDOTs state mandated Commute Trip Reduction (CTR) program. To this, nearly 2,000 responses from smaller employers are added to provide a full, statistically weighted picture of commute trends downtown.

For more information about the survey, please visit https://commuteseattle.com/modesplit-2017.