Impact is not a verb, and other colorful musings from a career well spent 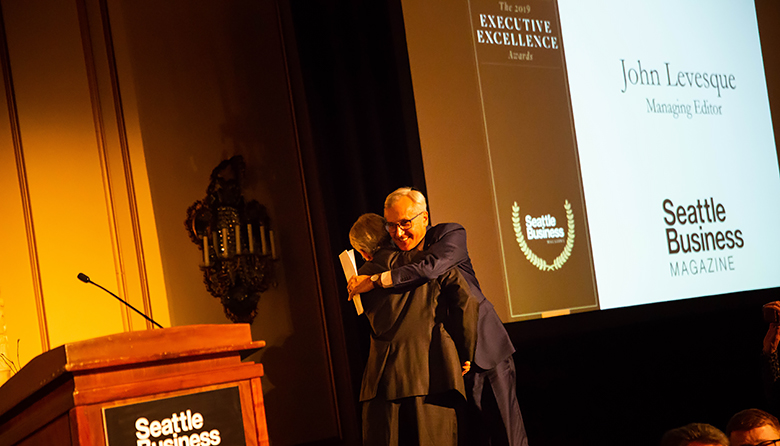 I remember reading John Levesques splendid prose back when he was a TV critic for the Seattle Post-Intelligencer in the late 1990s. I then read his sports columns for the P-I in the mid-2000s. Though John left the P-I in 2009, Im still reading him. For the past few months, Ive shared a small office space with him in my new job as editor in chief of Seattle Business magazine. John, who would have been managing editor here for exactly eight years this month, just retired. We will miss him. Though he often calls himself snarky, hes also avuncular, eloquent and solicitous. Words matter to him. So does this magazine.

John was slated to retire three months ago, just a month after Leslie Helm, his longtime office mate and partner in crime, called it quits. I picture them as the Sancho Panza and Don Quixote of the newsroom, two friends and journalists who embarked on an epic journey the better part of this past decade. They sharpened the writing and storytelling, added new features, and brought life and energy to a product the Society of Professional Journalists last year declared the best publication of its size in a five-state region. Thats no small feat.
When I started here in November, I asked John to delay his retirement. He willingly agreed. I needed his help. Ive worked on daily and weekly news pubs during my 30 years as a journalist, but Im new to magazines. The cadence is different. So is the lingo.

John taught me why magazines use the term department stories, how magazine columns are measured in sticks and that just about any pun can make for an entertaining headline that will engage readers. He also made me realize that just one extra or misplaced word can ruin an entire column.

John has helped produce almost 100 issues of the magazine during his tenure here. I imagine hes the most erudite and knowledgeable person at any party: He conceptualizes stories, edits virtually all of them and reads every line of every issue. He can tell you which restaurateur just opened a new joint in Ballard, why Renton could be an up-and-coming tech hub and which play to see at one of the many performing arts venues around Seattle. He tells stories from his days as a TV critic and sports columnist, including where members of the Frasier cast thought the title character might live (Westlake Tower) and how cheating in baseball goes way beyond steroids.

Seattle Business magazine readers will miss his tight and colorful writing. Colleagues will miss his boyish enthusiasm and biting sense of humor. I will miss Johns impertinence, his skepticism, his stories from decades of news battles.

Famed television journalist Harry Reasoner once said, Journalism is a kind of profession, or craft, or racket, for people who never wanted to grow up and go out into the real world.
John, I know youll make it.