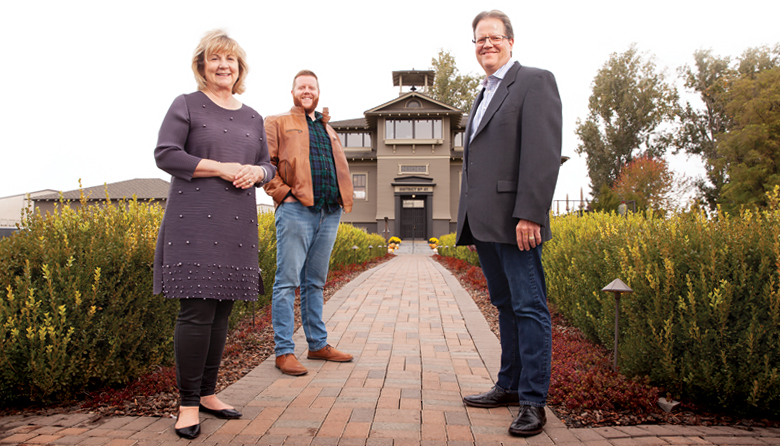 Named in honor of french-canadians who settled the Walla Walla Valley in the first quarter of the 19th century, LEcole No. 41 this year marked 35 years as the regions third-oldest winery. In 1983, founders Jean and Baker Ferguson remodeled a 1915 two-room schoolhouse of School District 41 into a winery. Today, its tasting room attracts about 30,000 visitors a year to Lowden, a small community along U.S. Route 12 between Wallula and Walla Walla.

In 1989, Megan Clubb and her husband, Marty, took over from the Fergusons, Megans parents. LEcole No. 41 joined the valleys early wineries in setting a high-quality bar, Marty Clubb says. Today, the region ranks among the worlds most respected viticultural areas. And LEcole No. 41 is one of the Northwests most honored wineries, having been included in Wine & Spirits magazines Top 100 Wineries of the Year 14 times. Its wines have frequently won top recognition in all the industrys publications and wine competitions, including a gold and three silvers at the 2017 Decanter World Wine Awards.

The Clubbs son, Riley, and daughter, Rebecca, have worked at the winery and remain involved in business decisions while pursuing careers outside the wine industry. Marty Clubb, managing winemaker, closely monitors quality control for grapes, some grown in partnership with two other wineries and others in LEcoles exclusive Ferguson Vineyard.

Making products for demanding environments, Mid-Mountain Materials specializes in engineering and manufacturing coated textiles and fabrics that can handle the most extreme temperatures even in space. With 45 employees, the company globally serves industries such as aluminum, aerospace, automotive, power generation, appliance, petrochemical and foundries.

Family members include second-generation President and CEO John Knapp and his sister, Gretchen Knapp Reimbold, vice president. Johns son, Jake, a 2017 Washington State University grad, also works there. Discussing strategies in meetings and written form, Mid-Mountain has increased efficiencies through lean manufacturing, administrative and operational procedures, and worker education. Steps to improve work culture and environments resulted in better retention while sales and profit margins also rose. Sales increased by 7 percent in 2017. An increase of 12 percent is expected this year, and of 10 to 15 percent in 2019.