The company uses two buildings in Burlington and about 80 feet of a dock in Anacortes to display its boats. 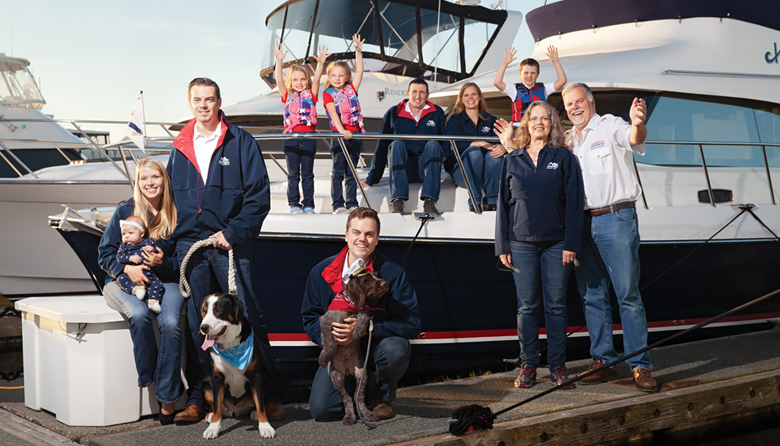 Already successful in boatbuilding, Larry Graf founded Aspen Power Catamarans in 2008 after developing a new design and drive system for powered multihull watercraft. The patented design involves one hulls being 35 percent narrower than the other. The asymmetry compensates for the offset thrust and torque provided by the single engine on the wider hull, allowing the boat to run straight. The design reduces drag by 20 percent and improves fuel efficiency by 70 percent. Graf says the boat is soft-riding in heavy seas and stable. Thats kind of our niche, he explains, a boat that works better in the ocean than most boats.

Aspen takes a direct-to-customer approach rather than selling through dealer networks. Buyers call, text or email Aspen and talk directly to technicians or a designer. Factory-direct dealing offers quicker innovations for product details. Graf helped pioneer power catamarans when, in 1987, he founded Glacier Bay Boats, which he sold around 2009. Now focused on Aspen, Graf enjoys hearing about his clients adventures, such as one owners taking a craft from Alaska to the Baja Peninsula, having it trailered across Mexico to Galveston, Texas, and then launching across the Gulf of Mexico and up the East Coast.

You typically wouldnt do that with a 40-foot boat, he says.

The company uses two buildings in Burlington and about 80 feet of a dock in Anacortes to display its boats. Graf says one perk is working with two sons, a daughter and son-in-law among a tight-knit company of 32 employees.

Its a fun industry, he says. We work with terrific [boat] owners. … Passion is a key component to our success.