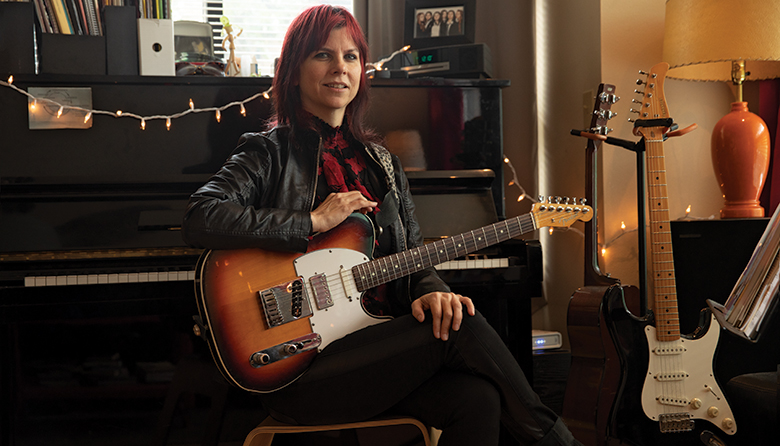 Kathy Moore is an accomplished guitarist who performs live in several Seattle bands. She also is a composer, an arranger and a popular music teacher offering lessons on both the guitar and the piano.

How many guitars do you own?
Twelve. My favorite is a 2006 Fender Telecaster that I bought from my favorite guitar player, Bill Frisell.

Name a memorable moment playing on stage.
It was after David Bowie died. I was playing Lazarus from Bowies last record, and my bandmates [Barrett Martin, Justin David, Jeff Rouse and Max Rose] let me play it the way I was feeling it. Being allowed to honor David Bowie so fully was a beautiful gift.

Name a memorable moment as an audience member.
Every Neil Young show.

If you could meet any guitarist, live or dead, who would it be?
Ive met Jeff Beck, and thats who it would be. I also wish Id met Wes Montgomery, an incredible jazz guitar player who kind of wrote the vocabulary of modern jazz guitar.

How would you describe the Kathy Moore sound?
I think of my guitar as an opera singer, so there are lots of soaring notes that are like singing to me. The nature of that feels spiritual.

Do you have a spiritual practice?
Music. Yoga. And I do this thing called walking meditation, where I think about the day and reflect on what I did and how I might improve my behaviors going forward.

Do you ever feel competitive?
Never. When I play with great guitar players, I feel exhilarated because it makes me play better … and if I get really excited by someone, I might even get better that night!

There arent that many women who can shred on the electric guitar. Do you consider yourself a badass?
I dont know if I am a badass, but I did once wear socks on stage that had BADASS written on the back of them. (Laughs.)

How did you get so good?
Practice. I probably had some natural ability to play music, but I practice all the time.

Have any of your students made it?
Well … I teach [Pearl Jams] Mike McCready. Not how to solo (big laugh) but how to read music and play scales.

Do you have a favorite female guitar player?
Emily Remler was a jazz guitarist and she was the best.

Have you experienced sexism being a female electric guitar player in a predominantly male business?
Yes, and its usually when someone comes in from out of town and theyre looking for players, and its assumed that the most capable person would be a man. I think they hear me through that filter.

Have you had the experience of proving those out-of-towners wrong?
Uh-huh. And its the greatest thing in the world!

Do you have a pre-show ritual?
I love funny people. If I can sit next to a funny person and let them entertain me before I go on stage, that helps me a lot.

Pearl Jams Mike McCready on Kathy Moore
Kathy is teaching me all the stuff I didnt learn as a kid. She is an amazing singer and piano player as well as one of the best guitar players around. She has expanded how I play leads, among other things. I felt I was getting into familiar patterns when playing live with the band. I needed to be able to go further in my solos for Even Flow, Alive, etc. Kathy is helping me.

How would you describe your relationship to money?
I grew up poor, so Im still having to learn the rules about money. They should teach that better in school.

If money were no object, what would your life look like?
I care more about relationships and about doing what I love, so probably not much different from what it looks like right now.

What energizes you, artistically?
I started an event called Synthesis New and Experimental Music where I invite musicians from all genres to perform original work solo or in a duet. Each show has four performances and they tend to be wildly different and very exciting.

Youre stuck on a desert island and can have one book, one record, one food and one guitar.
Mark Twain, Letters from the Earth; John Coltrane, Love Supreme; lemon-coconut cupcakes because you can take the bottom off and put it on the top and make a cupcake sandwich; my 2006 Telecaster.

What song would you like played at your funeral?
Led Zeppelins The Rain Song.