Eric Eye of Dark Age Tattoo on Capitol Hill specializes in restorative tattooing and is sponsoring the Marks for Life charity event on Oct. 6 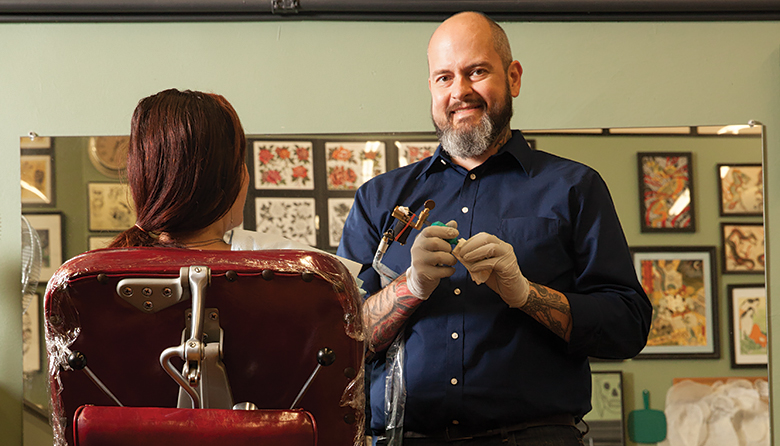 THIS IS GOING TO HURT: Eric Eye has been doing tattoos for nearly 30 years. He says the most painful place to get one is where the bone is close to the surface of the skin, such as the ribcage, the hands and the feet. Photo by Hayley Young. On October 6, Dark Age will sponsor Marks for Life, when all tattoos cost $50 and proceeds go to Northwest Hope & Healing, a nonprofit providing cash to breast and gynecological cancer patients at Swedish Cancer Institute.

Describe what it felt like to tattoo your first client. Terrifying.

Do you remember the first image you tattooed? It was the logo for the band Danzig a skull. Classic 90s.

Have you ever made a mistake? You cant ask me that! (Laughs.) Its not so much mistakes as coming up with creative solutions to different problems. Like when a clients body moves and you have to repair something as a result.

What percentage of your body is covered with tattoos? Probably around 50 percent. I still have a good amount of skin to cover.

Do you have any regrets about your own tattoos? I do regret covering up my first tattoo. It was bad, but Id rather still have it because it was my first.

Have you ever talked someone out of getting a tattoo? Oh, yes. If somebody comes in with an idea that is just bad art, I wont do it because I dont want to make bad art and I dont want them to have bad art. A lot of the job is saving people from themselves.

How do you handle it if somebody doesnt like a tattoo? Its crushing. And if its my fault and not a communication problem, I fix it. I want people to be happy.

When did you decide to be a tattoo artist? It was the late 80s/early 90s. I was a 20-year-old illustrator doing posters and cover art for local punk-rock bands when tattooing started to explode.

Do people get addicted to getting tattoos? Theres an old tattoo saying: Its a mile to your first one, a minute to your second one. And that really holds true. Once you get that first one, you cant stop thinking of images and its hard to reel yourself in. Its a good thing theyre so expensive and so painful.

What was the impetus for wanting to do restorative tattooing? It never occurred to me that there was a need for it until I met my girlfriend, who had just gone through a double mastectomy followed by reconstruction, which involved getting her areolas and nipples tattooed on. When she described the process and the difference that it had made, I realized I was particularly suited for that type of work because I do realistic portraiture skin tone and texture which is a specialty within tattooing.

Your tagline is artistry to take you beyond surgery. What does that mean? That comes from my girlfriend describing how, when she had the nipples tattooed on, she no longer saw implanted lumps. She saw breasts.

Does doing a restorative tattoo feel different from doing an anchor or a heart wrapped in barbed wire? Definitely. With my restorative clients, I never want them to think about it as a tattoo. Its part of their body. With my other clients, I want them to look at their tattoo constantly, show it to their friends and come back for more!

Do you work with the doctors of your clients? Not directly, but doctors and plastic surgeons from the Polyclinic and Swedish have been desperate for somebody who does restorative work locally, so theyre really excited about it and refer [patients] to me all the time.

How would you describe your relationship to money? Terrible. Art is always first for me and I am so lucky to have found a way to make a living from my art. I dont take that for granted.

Is there anything you cant live without? The internet! I love it! Everythings there.

What piece of advice would you give to your younger self? Pay attention to time, how it flows, because you dont get it back.

When do you know if something youve made is good? In the tattoo arena, its when a client is smiling ear to ear after were done. With a restorative client, its when theyre crying because that means I did my job well.

Is there a part of the creative process you like the best? Details. I obsess on little, tiny details.