"Family businesses are so different. As a 90-year-old company, there is so much tradition and legacy." 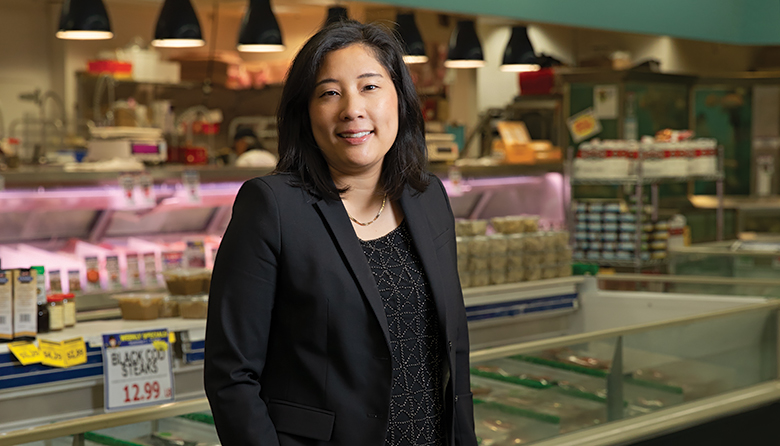 WHAT’S IN STORE. Denise Moriguchi, granddaughter of the founder, became president and CEO of Uwajimaya in February 2017.

With an MBA from MITs Sloan School of Management and two decades of experience working for large companies on the East Coast, Denise Moriguchi is well-qualified to run Uwajimaya, the chain of Asian groceries founded by her grandfather, Fujimatsu Moriguchi, in 1928. But she is proceeding cautiously as she sets out to modernize the companys operations even as she seeks to protect her familys legacy under the watchful eye of a large group of family shareholders who include her father, five uncles and aunts, and 19 cousins, most of whom are older than she.

EARLY YEARS: I grew up around the family business. My Dad, Tomio Moriguchi [formerly president,] my five uncles and aunts and their spouses and my grandmother were all involved in the business. Me and my 19 cousins all hung around the store. We often visited my grandmother, who worked at the deli, and she would make us food. The store was our second home. We worked summers and holidays doing things like bagging groceries. Over New Years, my uncles would pound rice to make mochi. The aunts would cut it, shape it, and put them on trays and we kids would flip them to cool them and package them. Later, we would all eat dinner together. We were all very close, but most of my cousins were older. I think many of them still think of me as this little kid.

JAPANESE INTERNMENT: I didnt learn about the internment camps until high school. I asked Dad, but he was just 6 when they went to the camps and didnt remember much. [The store closed when family members were sent to internment camps during World War II.] I went to my grandma, but she didnt want to talk about it.

EDUCATION: Coming back to work at Uwajimaya was always at the back of my mind as I studied economics and Asian studies at Bowdoin College in Maine. I did consulting for many years before getting my MBA.

RETURN TO SEATTLE: When I was on the East Coast, people knew about Nirvana and expected me to be grungy, but didnt really know much about Seattle. Now, I have lots of friends from the East Coast who have moved here. The people moving in are bringing new diversity and helping the city grow. That diversity has increased our customer base so much. When I used to bring rice balls wrapped in seaweed to school for lunch, my friends used to think the seaweed was gross. Now, everybody eats sushi. Personally, I feel proud that so many people are interested and excited about ethnic food.

UWAJIMAYA: When I came back to Seattle, I started at Uwajimaya in marketing. Then I became chief financial officer. Although I am not a finance person, it was part of my training. In terms of being selected CEO, I think the MBA helped, but it also helped that I bring an outside perspective from having spent 20 years away from the company.

FAMILY BUSINESS: Family businesses are so different. As a 90-year-old company, there is so much tradition and legacy. There is a past you have to recognize and appreciate. Our Asian identity is part of our companys history and its something we should celebrate. But we also want people to know about our quality seafood and produce. I have to balance that legacy with the need to modernize. Sometimes, that means slowing down to bring everybody else along. Its a hybrid of Japanese-style consensus making and something new.

PRESENT: We have four grocery stores and a Kai Market [in South Lake Union], which is a combined convenience store and lunch place with things like poke bowl, roast duck and sushi burrito. We also have a wholesale division that delivers to a lot of teriyaki restaurants and an apartment building with 125 units [built in 1928 as the Publix Hotel and remodeled in 2016 at a cost of $24 million]. We have about 500 employees and we pay them all $15 or more an hour.

UPDATES: In many ways, we still operate like a mom-and-pop store. Our city has grown and our company has grown, so we have a little more opportunity to invest. Our first step is to modernize our stores, beginning with our Seattle store. We still call it the new store, but its 18 years old. We need to upgrade our software and computer systems and offer an enhanced experience. We need to offer things like self-checkout stations.

NEW TASTES: People come to us to discover new tastes, but often they dont know how to use the products, so we would like to add demo stations that are integrated into the store to hold new product introductions. Sometimes, the packaging is only in Japanese, so we will try to translate more of that. Well also offer more prepared food, although its unclear whether we will have a central kitchen to prepare it ourselves. EXPANSION: Once we are standardized and have a system in place with our remodeled store, well look into expanding. Well most likely remain in the Pacific Northwest, where there are plenty of opportunities.

FAIRS: We will continue to do events like our natsumatsuri [summer festival,] which allows us to offer an authentic experience thats different from our new competitors. We organize the fairs with our biggest distributors, who get exposure. We have booths offering popular foods like edamame and okonomiyaki. We take over the whole block. Some nonprofits will offer games common at Japanese summer fairs, such as water-balloon yo-yos.

CULTURE: My husband is Chinese-American. We have two kids. We each take responsibility for sharing our culture. The kids are confident with Japanese culture. My husband has to introduce the kids more to Chinese culture.

Executive Q+A responses have been edited and condensed.