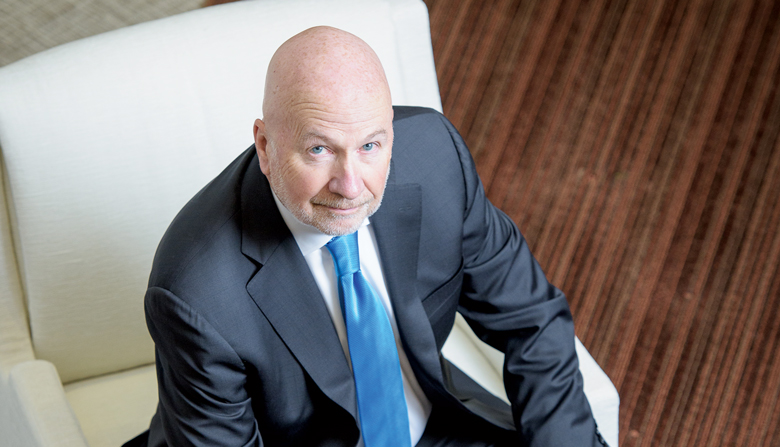 With grit and determination, Jim Kerr, who never finished college, has helped build D.A. Davidson Companies, a Great Falls, Montana-based employee-owned firm, into a financial services powerhouse with 1,330 employees in 22 states and $44 billion under management.

EARLY YEARS: I grew up in Oregon, where my dad made and lost several fortunes doing everything from owning a lumber mill to being a lumber broker. We had lived in 15 houses by the time I finished high school. I learned how to adapt, be resilient and build relationships. My brother, who was a pilot in the Navy, died in a plane crash when I was 15. Dad died from a heart attack a year later. There wasnt much [money] left for my mother when he died.

EDUCATION: After high school, I attended four different universities but never graduated. I dont know if it was the death of my brother and dad, but I lacked the attention span. I ended up in Bend, Oregon, working in a pub and skiing. I drove an old Plymouth and at one point I was so broke, I was happy when it was totaled so I could have some money. Another brother, a stockbroker at Foster & Marshall, invited me to take a test to be a broker. I semi-passed it and started as a broker in Salem, Oregon, at age 23 before moving to Seattle in 1978, when I was 26.

CAREER: My job was to cold-call people [to sell] bonds our firm was underwriting or stocks we were recommending. I wasnt very good on the phone, so I spent two to three days a week walking around SoDo talking to business owners. It was the middle of winter. These guys were in their 40s and 50s and were willing to give a young guy a shot. I studied hard and became pretty good with the balance sheets, but [without a degree] there were times when I would be in a room and wonder if I belonged there. When Foster & Marshall was acquired, I moved to Dain Bosworth.

MANAGEMENT: I took over as manager of Dains Seattle office in 1987, when I was in my early 30s. I gave my [client] book to my brother and focused on operational issues so my advisers could focus on their clients. I also cold-called brokers to try to bring them over and expand the office. Ive learned that success comes from doing the things that other people dont want to do. Whether you are a CEO or a beginning manager, you have to be able to deal with rejection. We ended up being Dains largest office. When the market crashed that year [on Black Monday], people were in tears. I had never been a manager, but I had to make sure everybody felt there would be a future.

RECRUITING: I look for people with grit who have a history of overcoming adversity. And, of course, integrity, caring about people, and competence. Im still willing to take chances on people. If it doesnt work out, I feel Im doing them a favor by sending them on their way. When they do work out, that really feels good.

D.A. DAVIDSON: I left Dain after 17 years and went to Ragen Mackenzie as their president in 1999. That was a tough time because we were a value-oriented shop at a time when everybody wanted to invest in technology. We ended up selling to Wells Fargo. I left in 2005 to become a managing director at D.A. Davidson Companies, then became CEO in 2015.

LEADERSHIP: Davidson is a rich platform with great values, but we needed to raise the bar in terms of professionalism [training for certification] and technology. Today, we have a better website. We offer electronic documentation and e-signature. Our portfolio management services are as good as any firm out there. We are also working on being more efficient so we can respond to customers faster.

INSTITUTIONAL: Over the past decade, by hiring the right people, weve become competitive in fixed-income capital markets. We issue bonds for developers to put in the roads, plumbing and electricity at construction sites. We are also a leader in issuing bonds for charter schools, local improvement districts and school districts. With whats happening in the country, [raising money for] infrastructure is going to be a big deal and we will participate in that.

M&A: We are a pretty big player in the mergers-and-acquisitions business but also participate in public offerings for small-cap businesses. Were most successful with small financial institutions like community banks. We provide research on them and also help them raise capital.

EXPANSION: The bigger you get, the better your margins and the more stability you have. We have 400 financial advisers who manage $38 billion in assets. Its a great business. Individual selection of stocks, done right, can really work out for people. We are looking for acquisitions to double the number of advisers over time. We also have a trust company and we are starting to develop special services, including managing real estate and private planes, for clients with $25 million to $100 million in assets.

REGULATIONS: Dealing with regulation takes time and puts an unprecedented burden on small companies in particular. We are now of a size where we can handle it. Two of our recent acquisitions were of companies that couldnt afford the cost.

DONALD TRUMP: I wish that he would stick to the platform issues that he has and not say things that hurt people. But when I look at his selections in the cabinet and his executive orders, I think they are positive steps for the country.

TAKE 5: Get to Know Jim Kerr

HOME: I live in a houseboat on Lake Union with my wife.

FREE TIME: We have a boat moored to the houseboat and we love cruising up in the San Juan Islands, Desolation Sound and beyond.

WHEELS: A Porsche Boxster. Im a gearhead. I worked on sports cars when I grew up and always loved them.

HISTORY BUFF: Learning about our country has been important to me recently. I liked David McCulloughs biography of John Adams. My wife and I also went to see Hamilton in New York.

FAVORITE PLACE: I love the Oregon Coast because of the time I spent there growing up.

EXECUTIVE Q+A RESPONSES HAVE BEEN EDITED AND CONDENSED.