Cartoonist David Horseys job is to elicit a reaction. 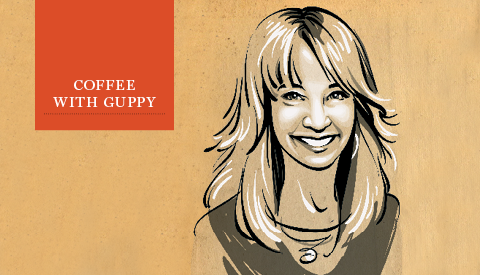 Editorial cartoonist David Horsey spent 30 years at the Seattle Post-Intelligencer, where he won two Pulitzer Prizes for his biting political commentary. He has worked as a cartoonist and columnist for the Los Angeles Times since 2012.

What is the job of a political cartoonist? Its similar to a columnist or an editorial writer: Observe the world and figure out whats important to talk about, then push the edges and caricature powerful people who deserve it. Essentially, its being a rabble-rouser.

Do you think of yourself as an artist first or a writer first? I describe myself as a journalist who draws.

Whats it feel like to have won two Pulitzers? The first time, I remember the feeling of champagne in my eyes. It really hurts! (Big laugh.) The second time, I knew how to do it better and hinted strongly to the Hearst Corporation that I wanted a big party in New York and I wanted them to pay for it … which they did! It was great.

Did the Pulitzer translate into money? The prize itself doesnt come with a whole lot of money but it translated into some serious raises from the P-I, which spiked my income at a convenient time for the Hearst retirement fund. The other way it paid off is that when the P-I went away, the Los Angeles Times came knockin and I think thats because there was a Pulitzer next to my name. David Horsey has published nine books showcasing his editorial cartoons. The latest, Top of the Ticket, satirizes the 2016 presidential campaign.

Do you have cartoonist heroes? Oh, yeah. Pat Oliphant tops my list because he really transformed what political cartoons looked like. Before Pat, it was much more symbolic stuff like labels and big characters representing nuclear bombs. He introduced a cinematic style creating a scene that feels like youre coming into the middle of a story.

What percentage of your ideas comes to fruition? Probably 90 percent because Im lazy and whatever I think of I just do. … Kidding! Actually, lots of general ideas roll around in my brain but once I hit on a solid nugget, I go with it. Sometimes, Im halfway through and its like This is crap! but most of the time, it works.

How do you lampoon a person who is already himself a cartoon? Its really hard. Part of the fun of doing a political cartoon is to take guys who try to maintain a proper presentation, a sane demeanor, and then exaggerate portray them as babies or characters from movies or whatever. With Donald Trump, there is absolutely no exaggeration necessary because he is a ridiculous human being who does amazingly crazy stuff.

When do you know youve hit the target? Most of the time, Im not entirely sure a cartoon works until I get feedback from an audience. And sometimes a cartoon I dont think is particularly great will blow up on Facebook. Im often surprised at the ones that hit.

Do you have any rules or boundaries about whom or what you will satirize? My main boundary is to calibrate the satire. I once did a cartoon about a high school principal in Kent who had come down on the school newspaper it was some sort of censorship situation and I was too harsh. I could have had a much lighter touch. Not everyone is Hitler.

Did working on The Daily, the UW newspaper, raise your game? Oh, yeah. When I joined The Daily, I had a fairly good high school style and by the time I was done, after drawing a cartoon pretty much every day for four years, I was at least ready for the minor leagues. If not for The Daily, I dont know what Id be doing.

What did your parents say when you informed them of your career path? They threw me out of the house! (Laughs.) My mom was an artist and my dad was a musician and music teacher, and they always told me that I could accomplish anything I wanted. I took their word for it and never thought about what I couldnt do.

Editorial cartoons communicate visually, whereas the majority of newspaper content is verbal. How does the visual communicate differently from the written? Its more subversive. I have this group of people I call them my anti-fans who disagree with me on everything but they come back all the time to see my cartoons online and I dont think theyd do that for a written column. Cartoons act on peoples brains in a different way.

Describe your relationship to money. I think its given me a happy marriage because I get money and I give it to my wife. (Laughs.) The truth is that I dont have a mind for money, so Im lucky to have a smart wife who keeps track of what we have and where it goes.

Do you have a thick skin? I do now, but I was a sensitive kid and in my early 20s, I took criticism personally. Eventually, though, I realized it wasnt personal at all and that people were just reacting in a political way. My life goal now is for Donald Trump to tweet about me in the nastiest way possible. That would be success!

What song do you want played at your funeral? Bagpipes! And not “Amazing Grace.” I want some eerie Irish thing that will have everyone in tears.

For more on the lives of entertainers, artists and entrepreneurs, tune in to Art Zone with Nancy Guppy on the Seattle Channel (seattlechannel.org/artzone).