Banker solidarity in Seattle saw it through tenuous times. Other cities werent as fortunate. 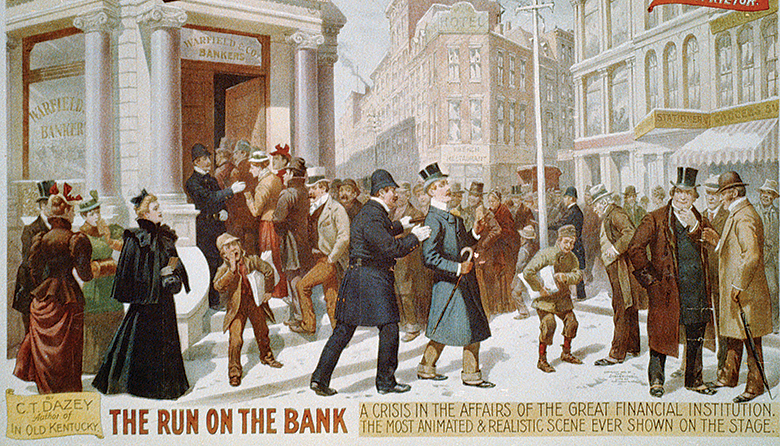 EDITOR’S NOTE: In his new book, The Panic of 1893: The Untold Story of Washington States First Depression (Caxton Press, 2018), Seattle journalist Bruce Ramsey explores a bank panic and economic depression that struck Washington four years after it achieved statehood. Like the Great Depression of the 1930s, the 1890s calamity was a worldwide event. To save themselves, banks cut off loans an action particularly painful to Washington, an infant state catching its breath after its first development boom.

The states cities fared differently, too. In this excerpt from The Panic of 1893, Ramsey looks at how banks in Seattle responded to and managed to survive the panic. PANIC ATTACK. The Panic of 1893 was such a calamitous economic event that even the entertainment industry took notice. The poster at the top of the page promotes a play, The War of Wealth, based on the run on banks that occurred. The cover of Bruce Ramseys book, above, combines an 1893 Liberty head gold coin with a photo of workersin an Arlington shingle mill.

Port Angeles, Port Townsend, New Whatcom [Bellingham], Anacortes, Everett, Ellensburg, Spokane and Tacoma are hit hard by the bank closures, but Seattle is not. Crows the Post-Intelligencer of July 20, 1893, less than two months into the Panic, There has not been a single failure of any description among the banks or business houses of Seattle. [There will be, later.]

Several reasons are offered. Seattle is one of the states older cities, and more people have put down roots there. Unlike Spokane, it is not reliant on silver. Unlike Everett, its real estate is not under the thumb of a single land company. Unlike Tacoma, its waterfront is not controlled by a railroad.

In Tacoma, Chester Thorne raises $200,000 to save the National Bank of Commerce of Tacoma and later comes to the rescue of Fidelity Trust. But in the summer of 1893, it is the solidarity of Seattle bankers that makes news. In The Quarterly Journal of Economics for January 1894, Albert Clark Stevens writes: At Seattle, Washington, banks met, and resolved early during the depression that they would stand by each other through thick and thin.

Says the Seattle Press-Times: It has been asserted that an ironclad agreement has been entered into between all the mercantile, manufacturing and banking interests to assist each other. No such treaty exists, the Press-Times says, but Seattles commercial men have acted as though there were.

A story circulates of how Seattle did this. In August 1893, the Yakima Herald writes: No jealousies, such as are said to have precipitated the first Spokane failures, were permitted to exist. The lawyers were pledged not to enforce outside collections, and the banks engaged every strong box of the safety deposit companies. Then they were ready for business. If a depositor took his account from a bank, every other bank was immediately notified by telephone and not one of them would open an account with him or accept his deposit. Application at the safe depositories showed that there was no chance for him there, and the only course left for him was to return his money to the original bank, which would accept the money only as a time deposit.

On August 9, the Tacoma News runs an interview with an anonymous Seattle banker. Seattles secret is not that its banks are stronger financially, the man says, but that the citys businessmen have been able to keep the people under control. Employees who pull out their savings are told they will be fired and blacklisted. Depositors who pull out their savings are paid in gold, and banks refuse to exchange the gold for high-denomination banknotes that are easier to conceal. Says the banker, The banks control the safe deposit business of this city. Therefore, we make it rather disagreeable for the timid depositors who have withdrawn their money. It is almost impossible to rent a safe deposit box in this city today.

In November 1893, the Oregonian reports that banks have shrunk their book of loans by only $100,000 in Seattle, and at least $500,000 in Tacoma, Spokane and Portland. Much of Seattles success, the Oregonian says, is by banks lending to each other and by tapping stockholders for new capital.

Seattle has strengthened its name. In September, a Philadelphia manufacturer of bottles visits Tacoma with an eye to opening the first glass manufactory in the Pacific Northwest. A plant could be built in Tacoma, the man tells the Tacoma Ledger. But he complains of a lack of unity there, while people in Seattle, he says, stand together very much more than the Tacoma people. No doubt these comments pain Tacomas principal daily, but it prints them.

That is from 1893. Seattle did have bank and commercial failures, but proportionately fewer than other cities. The difference in the social and political spirit between Seattle and Tacoma continued through 1897, as the main impetus for recovery slowly gathered power: the gold rush to Alaska and the Yukon. Seattles merchants went after the Alaska market early and hard, so that when the famous gold ship docked in July 1897, Seattle was already the dominant supplier to the North. The 1900 census showed the results. In the decade of the 1890s, Seattles population increased by 88 percent and Tacomas increased 5 percent. Tacoma went on to recover and become a major international port. But in the 120 years since, the population gap between the two cities has never been closed.