In a booming economy, owners of mobile homes face the prospect of having their land sold out from under them. But creative options exist to help them preserve their communities. 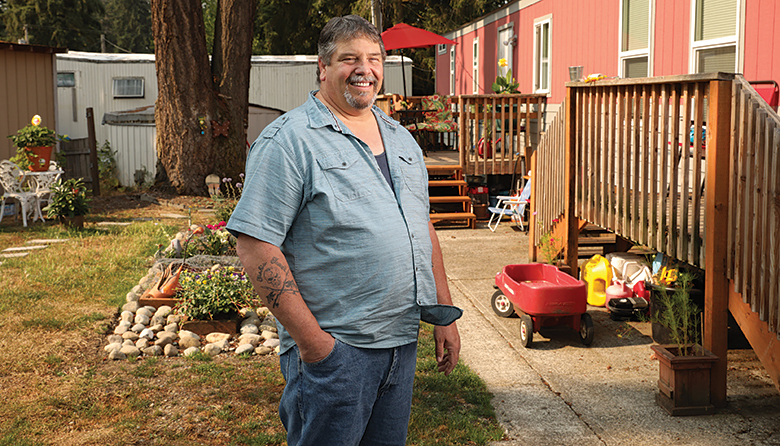 SOLID AS A ROC. Steve Aitchison and fellow residents of the Woodbrook mobile home park in Lakewood formed a cooperative to buy the land from an owner who wanted to sell to a developer.

This article appears in print in the October 2018 issue. Click here for a free subscription.

Twelve years ago, dozens of residents living in a mobile-home community in Renton faced the possibility of eviction. The owner of Wonderland Estates wanted to redevelop the park into townhomes and had begun the process of closing the community.

The residents, many of them with low incomes, anxiously sought ways to preserve their community. They found the solution in the King County Housing Authority (KCHA), an independent municipal corporation created by the state of Washington in 1939 to provide affordable housing and related services. KCHA receives no operating funds from the state, King County or cities within the county. It manages a handful of mobile home parks to keep them affordable to low- and moderate-income seniors or families with children.

We were asked to get involved at the behest of the residents and elected officials, who were looking at somewhat of a catastrophic situation if basically 108 homes in there had been displaced, says, KHCA Deputy Director Dan Watson.

KHCA entered into negotiations with the landowner, Robert Eichler, and eventually acquired the 12.2-acre parcel for $8.4 million in 2008. Wonderland Estates has remained intact and affordable ever since. Mobile-home and modular-home communities constitute a key source of affordable housing in Washington. Today, Washington has 1,250 registered communities providing nearly 65,000 spaces, according to the Washington State Department of Revenue. Many residents are seniors on fixed incomes and others are first-time homebuyers, says Brigid Henderson, program manager for the State Department of Commerces mobile home relocation program.

In some parts of Washington, especially urban areas, these mobile home parks constitute some of the largest pieces of undeveloped land in the state, making them extremely appealing to developers looking to build retail centers or residences.

The Commerce Department says that, between 2017 and 2020, at least 14 parks will have closed or will prepare to close. The land, Watson explains, is more valuable for single-family-home development or other types of development where you can go vertical and build a bigger structure on a small plot of land.

The situation has resulted in something of a clash between residents who want to preserve their affordable housing, mobile-park owners looking to sell, and developers interested in transforming the property into a more profitable enterprise. So, in recent years, residents have sought solutions to preserve their communities and safeguard their way of life.

For communities like Wonderland Estates, this approach involved teaming up with a local housing authority to buy the park. Since KCHA acquired it, Wonderland Estates has remained open and the monthly rent has increased by only $100 in 10 years, to $600. (The average rent for a two-bedroom home in King County is about $ 2,150 per month, according to Zillow). KCHA uses the rental income to pay for such things as maintenance, utilities, landscaping and insurance. If the park had been kept open but privately owned, the rent likely would now be at least a few hundred dollars higher, Watson says.

But as the value of land rises much faster than rents, acquiring these parks has become more daunting. KCHA says it was contacted recently about a 76-unit park on 7.5 acres of land. The residents of Halcyon Mobile Home Park in north Seattle are trying to preserve their community, but it is proving exceptionally difficult. KCHA estimates that, as a park, its worth between $4 million and $5 million. Because of its location and zoning, however, the owner is asking $22 million.

Its a bridge too far when the gap is that large, Watson argues. Its not feasible [for us] to try to acquire it at its fair market value.

So, another preservation option is for residents to buy the park themselves. The Northwest Cooperative Development Center (NWCDC), a nonprofit based in Olympia, helps communities become resident owned. Affiliated with the national nonprofit ROC (for resident-owned community) USA, it has converted 13 parks in Washington since 2007.

Woodbrook Wagon Homeowners Coop in Lakewood is one of NWCDCs most recent conversions. Steve Aitchison, president of the community, says the process began in 2016 when residents were notified the park was being sold. When they say theyre going to sell, your first thought goes to its going to be purchased by some sort of corporation or a slumlord or something and theyre going to raise rents or run you out, says Aitchison, who has been living in the community for 17 years.

Residents of the 48-home park, most of whom have low incomes, attended a meeting and were asked by the NWCDC if they would like to own their community. Aitchison says they agreed almost immediately.

New Hampshire-based ROC USA helped them secure a loan to buy the roughly 3-acre parcel for $2.7 million. They formed a board of directors and created bylaws and rules. About six months after they decided to convert, they became resident owners. Each household pays a $479 monthly fee and a one-time $250 membership to join the co-op that owns the land.

Its a really great opportunity and they recognize that, says Diane Gasaway, NWCDCs executive director. If they can get control and own the community themselves, then they have the power to keep it up to their standards and to control the rent.

Still other mobile home communities have opted to turn to nonprofit investors to secure their homes. Manufactured Housing Community Preservationists (MHCP), for example, buys, renovates and operates mobile-home parks to keep housing costs affordable. It uses a combination of traditional bank financing and public funding to buy the parks at below-market mortgage rates so that tenant rates can be set low based on income. MHCP owns five mobile-home parks across Washington.

The approach is collaborative. A board of directors runs the nonprofit and one elected resident from each mobile home community can join it. Homeowners are responsible for their own utilities, personal property taxes, insurance and maintenance.

Preservation has clearly become the operative word in todays mobile home communities because the chances of new parks being built are remote. The land costs today are such that I dont think youre going to see any additional mobile home park development in King County, Watson predicts.

Meanwhile, many parks continue to close. In 2017 and so far in 2018, the state has seen the most park closures per year in almost a decade, according to the Commerce Department.

Economic growth, including business expansion and the rapid need for market-rate housing (as well as the need for large-scale affordable-housing development) seem to be the drivers of the recent increase in park closures, the Commerce Departments Henderson said via email.

The commerce department has a variety of resources to help preserve these parks, including a manual that details how residents of mobile home communities can come together to purchase their park and loans for low-income residents living in parks transformed into resident-owned communities.

The department has helped preserve more than a dozen mobile home parks between 1993 and 2009 through the states Housing Trust Fund, which awards funding for affordable housing projects, and federal home loans, Henderson says. It currently has about $966 million in active investments, according to Jason Davidson, portfolio manager at the Commerce Department. Although most awardees tend to be shelters or multifamily rental properties, mobile home parks that serve low-income households are also in the mix.

The Housing Trust Fund awards money in the form of loans, with an interest rate ranging from 0 to 3 percent, and grants. Organizations that receive an award must remain affordable for 40 to 50 years, according to Davidson.

Some cities in Washington have preservation built into their comprehensive plans. They have mobile home-park zoning, which means the communitys landowner would first have to get the property rezoned before attempting to redevelop it. Bothell, for example, has such zoning, which can only be changed if someone requests a comprehensive plan amendment.

When there isnt any type of zoning in place to protect the community, it can be difficult to preserve it, Watson notes. Theres nothing at that point anyone can do to stop a developer from coming in and doing what in their mind makes perfect sense, which is developing the property to its highest and better use, even though the residents may be collateral damage in the redevelopment program.

Becoming collateral damage hardly makes perfect sense to homeowners who may not have the wherewithal to counter a developers best offer to a mobile-home-park landowner. What makes more sense to them is having options that give them a fighting chance to remain part of a larger community that is fast becoming affordable to only the well-heeled.