Traffic downtown is only going to get worse. Can we toll our way out of the mess? 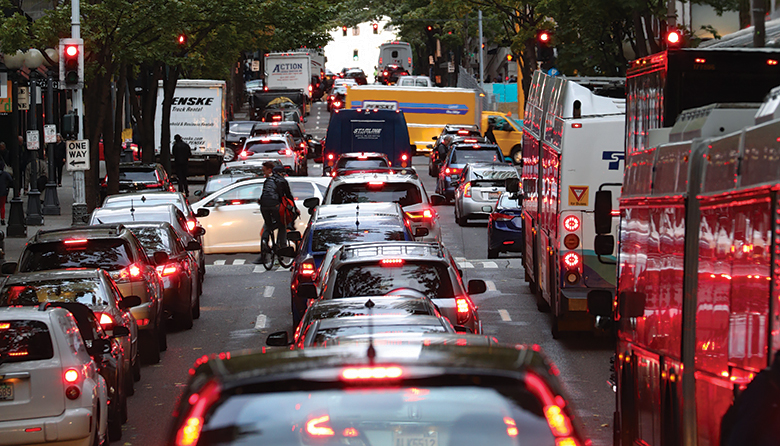 January 2020: The convention center addition is under construction, kicking almost 600 buses out of the downtown transit tunnel and closing ramps that used to give buses direct access to the Interstate 5 express lanes. The buses now share city streets with more cars than ever, as hundreds of drivers divert to surface streets to avoid the new Alaskan Way tunnel, which has a $2.50 toll during nonpeak hours and no downtown exits. Meanwhile, the old Alaskan Way Viaduct is still being demolished, KeyArena reconstruction is creating traffic chaos in lower Queen Anne and South Lake Union, and more commuters are adding to the congestion by choosing Uber and Lyft over buses that are often off schedule or full.

What if there were a way to alleviate all this predicted chaos a phase the city refers to, drily, as the period of maximum constraint without forcing people to get up at 4 a.m. to beat traffic? Or work from home?

Some city leaders, including Mayor Jenny Durkan, think they may have found a solution in a concept called congestion pricing. The idea is simple: Charge people to drive into the city center during the times when congestion is worst and use the revenue to fund alternatives to driving. Voila: fewer vehicles, faster transit, improved air quality and safer streets for bicyclists and pedestrians.

Most people have already made the decision [not to commute downtown by car], says City Council member Mike OBrien, referring to the fact that those who work downtown dont get there by driving alone. OBrien is leading the congestion-pricing charge. For those who havent [decided], this will give you more options, and for those who want to keep driving, you can keep driving and your commutes going to be faster. Its just going to cost you more.

In practice, it isnt so simple. The City Council last year authorized $200,000 for a study on the effects of tolling downtown streets an idea that will require voter approval to move forward as well as other options, such as taxing Uber and Lyft rides, that would not require a public vote. In September, Durkan released a budget that provides an additional $1 million for the city to study congestion-pricing options in more detail and to conduct outreach to community members and businesses, with the goal of implementing congestion pricing by 2021, when the mayors first term ends.

While tolling may be controversial a 2015 poll by the Puget Sound Regional Council found that 54 percent of King County residents opposed the idea of universal highway tolls Durkan points out that in other cities that have implemented tolling, such as London and Stockholm, People who have to drive [found] that its actually more efficient and more effective than the previous free-for-all system. However, Durkan warns that before the city puts a tolling plan on the ballot, We have to engage people deeply … and make sure that it is paired up with meaningful transit because we cant ask people to get out of their single-occupancy vehicles until there are meaningful alternatives. Technologically, the city would create a cordon of virtual checkpoints at the edges of the toll area and charge drivers, using car-mounted transponders, whenever they enter the area during times when tolls are in effect. This is exactly the system most states, including Washington, already use to toll state highways.

It gets more complicated, advises Mark Hallenbeck, director of the University of Washington-affiliated Washington State Transportation Center, when the city starts making choices about whom to charge. And when. And where. If South Lake Union is included in the tolling area, should people who live on Queen Anne get a free pass because they need to go through South Lake Union to get to I-5? If some low-income workers have no choice but to drive downtown, should the city create a low-income or nighttime exemption to the pricing scheme? All these choices have consequences and costs.

About 25 percent of people who work downtown get to and from their jobs by driving alone. That number has declined steadily in recent years, according to the Downtown Seattle Association (DSA), thanks to improved transit downtown and the creation of incentives for employees to commute by bus or by bicycle.

DSA CEO Jon Scholes cites this improvement as evidence that the carrot approach to reducing congestion can be as effective as the stick.

Its not clear to me what problem were trying to solve here, Scholes says. [Durkans announcement] feels a little divorced from any clear strategy or plan. The constraints we have are the need for more transit capacity more buses are driving by full, and the light rail system is taking longer to build than anyone wants and the need for more housing. Generally speaking, we think we should focus our efforts there.

Other skeptics of congestion pricing worry that tolls will disproportionately harm low-income people who have no choice but to drive to work, often from homes far outside the Seattle city limits.

The suburbanization of poverty is real, says City Council member Rob Johnson, who supports creating a program to reduce costs for low-income drivers. Were pushing people out of the city, he asserts, adding that theres no way the region can improve transit fast enough to serve all the low-income workers who would be affected by congestion pricing.

Its unclear how many low-income workers actually would be affected. In 2017, a Puget Sound Regional Council report concluded that low-income commuters were much more likely to walk and take transit than the overall population a finding that corroborates a 2009 Washington State Department of Transportation report that found the poor are less likely than the non-poor to commute in a personal vehicle and more likely to commute using public transportation or other modes that would not be subject to tolls.

One of the things you hear whenever you talk about a congestion-pricing scheme is, This will be unfair to low-income people, and there are a lot of anecdotes that get brought up that are certainly real, OBrien says. But in a city like Seattle, where parkings pretty expensive as much as $4.50 an hour for on-street parking downtown and $10 an hour or more in private garages my sense is the majority of people who drive downtown are people who have a lot of options.

The way to address the needs of lower-income people who must drive downtown isnt to reject congestion pricing altogether, OBrien continues. Its to design the system around their needs so they wont be burdened by extra costs; for example, by making it free to drive downtown at off-peak hours, when many shift workers start their jobs.

Hester Serebrin, policy director for the pro-transit Transportation Choices Coalition, says she sees no inherent contradiction between promoting alternatives to driving alone and creating an equitable, affordable transportation system. [Congestion pricing] is a big, bold idea, so lets go big with our policy asks, she says. If the goal is building a more equitable transportation system, that will inherently include a lot of things around transit speed and reliability and safe bike and pedestrian access.

For now, the city remains in study mode, with more reports focusing on equity, race and social justice, and priorities for spending toll revenues due out soon. Then it will have to sell the idea to the public, which could be a heavy lift, and not just because Seattle would be blazing a trail on congestion pricing for the rest of the country. People tend to hate the idea of paying for things that used to be free unless they can see concrete benefits. In Stockholm, leaders put tolls in place about seven months before seeking voter approval. Once voters saw how a $2.15 toll to drive downtown affected the city reducing traffic in the city center by 20 percent and cutting childhood asthma cases in half they approved the plan with 53 percent of the vote. In London, where drivers pay about $15 to drive into the city center on weekdays, congestion decreased by 30 percent and public transit gained tens of thousands of new riders.

Could something similar happen in Seattle?

OBrien, who started pushing for congestion pricing in 2017, says hes feeling a lot more optimistic now that Durkan has shown that she is very interested in moving forward with the concept. The trick, he says, will be demonstrating that people wont get stuck in even worse traffic if they let go of their steering wheels.

Part of it is on [city leaders] to say, Were going to provide buses that have more space and arent stuck in traffic, OBrien says. If, in this new system, you can see that driving is more expensive and the bus will get you downtown faster, youre going to see the benefits.