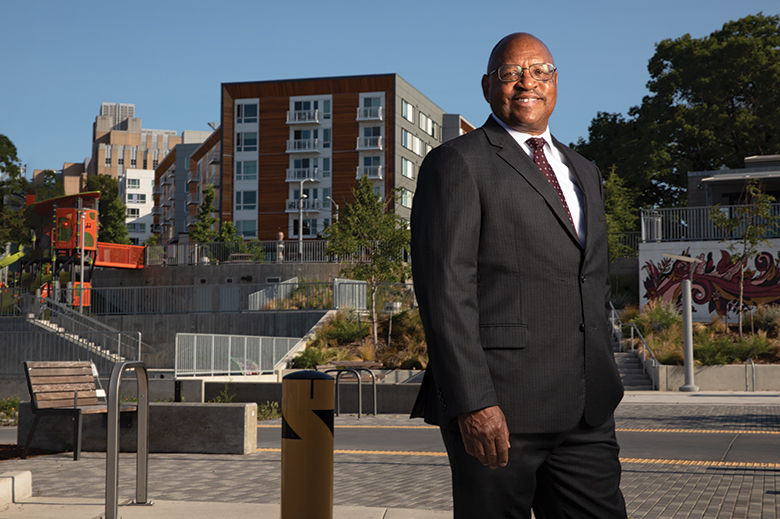 This article appears in the September 2019 issue. See more about the winners of the 2019 Skyline Awards here. Click here for a free subscription.

The opening of the Red Cedar building this year marked the halfway point in Seattle Housing Authoritys multiyear project, launched in 2013, to redevelop and rejuvenate what used to be known as Yesler Terrace, built in 1941 as the citys first housing project. At the time, it was the first racially integrated public housing development in the United States.

Remaking Yesler Terrace (its now officially referred to without the second word) doesnt just mean replacing 561 older housing units with modern and affordable housing, although thats a big part of it. The housing authority is adding more than 1,000 units for low-income tenants. Private developers are adding more than 2,500 market-rate apartments.

Red Cedar is the fourth new residential building to open as part of Yeslers $1.8 billion redevelopment. The 119-unit apartment building includes features such as energy-efficient appliances, windows and lighting, a community room, a central play area and courtyard, community services space, accessible units for people with disabilities, and Breathe Easy apartments, designed for people with asthma and other respiratory problems. Nearby, the 237-unit Cypress, developed by Vulcan Real Estate, includes 48 units of affordable housing.

The transformed neighborhood also includes new park space, pedestrian corridors connecting Yesler to other neighborhoods and access to the regions transit grid through a streetcar line.

Next up: Seattle Housing Authority hopes to have the 139-unit Hinoki apartment building, currently in design, ready to open in early 2021.

This seven-story housing development, built on the site of a one-story warehouse in the South Lake Union neighborhood, was designed to pack as much energy efficiency into its 384 units as possible. Since water heating is a major cost of energy in new multifamily buildings, Sitka uses a system to capture heat from outgoing wastewater for heating incoming water, and water from showers and laundry is re-used for on-site irrigation. Ductless heat pumps installed in all units facing west and south, and in a third of remaining units, provide cooling in the summer and reduce energy used for space heating in winter. Sustainability measures are on the outside as well: a green roof with drought-tolerant plants, bioretention planters to capture runoff from the roof, and a property easement for the citys biofiltration swale for treating stormwater.