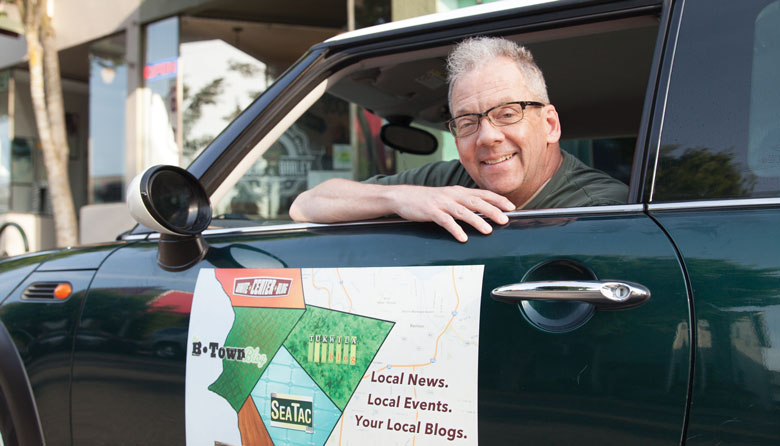 This article appears in print in the August 2018 issue. Click here for a free subscription.

Hyperlocal was supposed to be the next big thing in the news business. With traditional media like print daily newspapers shrinking, sometimes into nonexistence, the news vacuum would be filled by blogs and websites, reported by anyone from professional journalists to community volunteers, focused on local people, local government, local businesses and organizations, and local issues.

Some made a sustained go of it. Others, after an initial burst of enthusiasm, faded into inactivity, especially the volunteer-driven sites that discovered that keeping up with the news took a lot of time and energy. Not that big organized businesses proved more successful. AOL made a huge push into hyperlocal with its Patch network of local sites, only to retrench dramatically.

Then theres South King Media, which grew out of one mans hobbyist project into a regional network of sites covering the contiguous communities of Burien, Des Moines, Normandy Park, SeaTac, Tukwila and White Center. The latest addition to South King Medias portfolio is the iLoveKent blog, launched in 2007 by Dana Neuts. It became part of South King Media on January 1.

Publisher/Editor Scott Schaefer says he wasnt planning to become a sort of mini news mogul when he started the B-Town (for Burien) Blog in 2007. Instead, he was just looking for things to do with his family in the community one weekend.

I could not find any listings, he recalls. Inspired by the examples in West Seattle, Capitol Hill and Ballard, Schaefer decided Burien could use a blog. He picked a name, paid the $7.95 registration fee, set up the site and began posting. I thought this would be a nice little hobby, he says.

Schaefer wasnt a newcomer to the worlds of media and news. As a writer, director and producer of video, hed worked on the local comedy program Almost Live! and on Bill Nye the Science Guy and had done a stint in Hollywood. Hed also been editor of papers in junior high and high school and had studied journalism at Highline College. To begin a local news website, even one launched as a hobby, was like getting on a bike again, he suggests.

But less than a year into the project, it morphed from hobbyists pastime to commercial venture when Schaefer got a call from a local real estate agent asking, Do you sell ads? That led to the hiring of a sales manager, which meant revenue, an actual office and a full-time job for Schaefer.

While ads pay the bills, its content that drives people to the websites. It all boils down to original local content, he notes. Crime news tends to top the list of most-read items, but the blog also devotes considerable space to coverage of municipal government and the local school district. Its human nature to want to know whats going on in your neighborhood, he says.

Schaefer says the subject matter, the speed of posting new items, the frequency of posting and attention to journalistic practices all keep people coming back. So does extensive use of social media. The websites top source of referrals is its Facebook account. In 2017, before the addition of ilovekent.net, the six local blogs had attracted 625,877 users and racked up just under 4.6 million page views.

What Schaefer is doing is very much at the forefront of the trend in local news, says Matt DeRienzo, executive director of Lion Publishers, a trade organization for local, independent online news sites. The association has more than 200 members in 45 states.

Were seeing a major decentralization of local news in this country, DeRienzo says. Local independent online news sites have risen over the past 10 years as the print newspaper industry has declined. That trend has accelerated rapidly in the past few years as the industry has consolidated into the hands of three or four big companies, several of which are controlled by hedge funds that arent in the journalism business and are making steep cuts to local journalism.

Neighborhoods in the region, including several Schaefer serves, still have weekly print publications covering them. DeRienzo sees online news sites like South King Medias as one more feature of the new media landscape. The new reality is that what used to be done by a single dominant newspaper will be handled by an ecosystem of local online news sites, general interest and niche, nonprofit and for-profit, and other sources, he says.

Not that its an easy business. Its difficult to make a go of it on digital advertising alone, for example, in many communities, he adds. You see some local independent online news publishers opening a small network of community sites in their area, both because the need exists and the model works, and for the efficiency and sales capacity it allows them in building a business.

Schaefer doesnt have any immediate plans to add to the list of markets, even those contiguous to the ones he now serves. Only if it was an organic fit, he says. Im not actively pursuing expansion.

But that could all change depending on how things go with the Kent site. If we get traction down there, he acknowledges, who knows?

Schaefer will keep experimenting with new ways to deliver news to readers and viewers. He has already tried an internet radio station and podcasts (both drew a limited audience compared to the amount of time involved). Hes now looking at ways to repackage content for consumption through virtual-assistant services and devices like Amazons Alexa and Google Home. Im a big tech nerd, he says. Im always looking to try new things.

Whatever the delivery channel, the core product will always be local news and information. Were filling a need, Schaefer says. In a number of markets, were the only ones doing it.