How Seattle Retailers Are Surviving in the Age of Amazon

Especially in the shadow of Amazon, savvy Seattle retailers know they must make the shopping experience special if they want to survive and thrive. 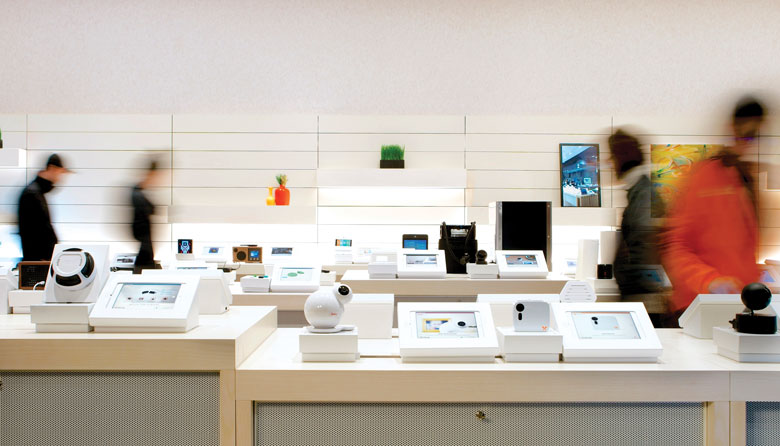 This story appears in the July 2018 issue. Read more from the story here. Click here for a free subscription.

Four months ago, an unusually subdued guest dropped by the late-night TV show Jimmy Kimmel Live. Once widely beloved by millions of American children, Toys R Us mascot Geoffrey the Giraffe had fallen on hard times. Kimmel declared that Seattle-based Amazon wont rest until every other store is an abandoned warehouse teeming with raccoons. Geoffrey the Giraffe agreed, pointing to Kimmels audience and claiming, All you bitches bought toys on Amazon. Now Im out of a job.

The mascot was eventually escorted off the stage and into the shadows, presumably to join other once-untouchable retailing giants think Sears, Staples, Payless, RadioShack, JCPenney that have found themselves irrelevant.

As Amazon casts a long shadow across many sectors, though, local retailers arent giving up. They persist in the wake of the big retrenchment of 2017, when 8,000 stores were shuttered nationwide, making last year a most ominous one for retail, trumping even 2008 at the height of the Great Recession.

Its not that all retail is going away, says Dick Outcalt, a longtime Seattle-based retail consultant and strategist who, with business partner Pat Johnson, closely watches Americas rapidly evolving retail industry. Outcalt and Johnsons 30-year partnership has bred some predictable banter at cocktail parties, where theyre constantly approached by people asking if shopping as we know it is on the verge of disappearing.

About 90 percent of retail still happens in traditional stores, Johnson explains. Despite a steady cascade of closures, she notes that new retailers constituting about 8 to 11 percent of the total industry start up each year. You wouldnt know that, Johnson admits, especially in Seattle, where were just surrounded by Amazonians.

Nowhere is the battle between bricks and clicks more apparent than at Seattles downtown Macys store, a historic institution that has lost so much ground literally and figuratively that Amazon is converting six full floors of the building into office space. But despite Jeff Bezos and companys exploding presence in Seattle, Outcalt and Johnson consider Amazons current domination just the latest chapter in the saga of an industry constantly pulled by shifting tides.

Twenty years ago, Walmart was going to ruin all independent retailers, Johnson recalls. Then there were the category killers like Toys R Us, and before that, the advent of shopping malls that threatened to upend Main Street. While Amazon might be retails current darling, e-commerce also transfers a lot of responsibility to the customer.

Youre doing all the work, Johnson says of the online shoppers new burden of weeding through daunting selections, investigating products and prices, handling the transaction, planning for delivery and, frequently, preparing returns.
And you think that is saving you money somehow? she asks. Driving through the heart of downtown or walking through Pacific Place and Westlake Center, its easy to spot empty stores. But if you think these are signs that brick-and-mortar retail is in trouble, try telling that to shopkeepers downtown, where explosive growth largely thanks to Amazons corporate campus has beckoned new residents, fresh construction and retail opportunity.

What were hearing downtown from our members is that business is going really well, agrees Jacqueline Gruber, a senior economic development manager for the Downtown Seattle Association (DSA). According to the DSA, retail sales have increased by 34 percent since 2010. In 2016, according to DSAs latest economic report, downtown merchants realized a cool $1.5 billion in sales revenue.

While downtown Seattle has recovered nicely from the recession, partly because of a boom in new restaurants and bars, retailers are taking advantage of Seattles flourishing economy to reinvent themselves in creative ways that will lure and hold customers. This tactic often means embracing both online and brick-and-mortar platforms as well as catering that experience to who your audience is, says Gruber.

She points to stores that have incorporated digital strategies while previously online-only retailers have grown into physical spaces to foster brand loyalty.

Its not really two separate [models], Gruber says of the industrys omnichannel approach, which includes suburban mainstays like Target stores embracing smaller urban concepts downtown (and in Ballard next year), while other retailers, such as Walmart, realize that incorporating e-commerce means they can make do with smaller footprints and fewer big stores.

Of these approaches, the interplay between food and shopping seems particularly important, with retailers finding that restaurants can drive traffic.

We used to talk about how you need to have restaurants in the shopping center to keep people from leaving when they get hungry, says Jennifer Leavitt, VP of marketing for The Bellevue Collection, an early pioneer of the mixed-use concept. Now, restaurants help draw [people] for shopping.

It comes down to creating a social experience, Leavitt says, particularly for the younger demographic.

This experiential retail concept retail-tainment, as its sometimes known is the buzzword right now. It aligns with growing consumer demand for experiences in other words, things that cant be replicated online. Examples abound, such as the Starbucks Reserve Roastery on Capitol Hill and its newer Reserve store at the companys SoDo headquarters (the first of 1,000 planned Reserve stores); Pioneer Squares Drygoods Design, where sewing groups and workshops are offered along with fabric for sale; and downtowns Steepologie, which provides a showcase of more than 300 loose-leaf teas and tables piled high with board games.

You cant just throw stuff on a rack and expect it to sell, says co-owner Joe Raetzer of Steepologies approach, which invites customers to put down their smartphones and engage with the product.

Nordstrom, which has long played to retails social aspects with restaurants, bars, cafes and pop-up shops, is experimenting in Los Angeles with a new showroom concept called Nordstrom Local. It eschews the typical inventory to offer guests a 360-degree experience with in-store fittings, personal styling, curbside pickup, an on-site bar and a nail salon. In a clear signal of the brands commitment to taking its legendary service online, Nordstrom has also incorporated two e-retailers, BevyUp and MessageYes, to help deliver its trademark shopping and style advice straight to customers through their smartphones.

Its the best of both worlds, says Gruber of Nordstroms standing invitation to shop products online and then try them on in the store, which also alleviates the age-old disappointment of turning up only to find the store doesnt have your size.

No one has time for that anymore, says Leavitt. Todays time-strapped shoppers, owing to technology, are more informed and discerning. Savvy retailers respond with multiple sales channels for added convenience, including options to buy online and pick up in the store.

It has to be frictionless, Leavitt notes of the modern shopping experience. And it should leave consumers feeling as if they got some added benefit, be it a social experience, great service or something else that makes them feel it was worth the trip.

In the end, Leavitt says, although we believe really strongly that bricks-and-mortar and online are very important to each other, we also know that for there to continue to be that balance, bricks-and-mortar has to provide an experience that cant be found online. Target is experimenting with even smaller urban stores

Bonobos, the nationwide mens clothing retailer with a store at University Village, is one of the retailers driving the showrooming trend, which basically means you can try something on in the store, order it online and have it delivered to your home.

Now owned by Walmart, Bonobos happened upon the concept almost by accident when, as an online-only store, it invited customers to try on clothes inside its New York City office. It was more of an internally focused showroom, recalls Micky Onvural, copresident and chief marketing officer. We realized we were kind of onto something when we saw the metrics, she adds, recalling that surprisingly high numbers of customers who tried on the clothing wound up purchasing the items.

Were removing the guesswork of a traditional retailer who doesnt have a strong e-commerce presence, Onvural says.
The showroom model also has cost efficiencies, requiring only a curated selection of inventory and less floor space, thus freeing staff to engage with customers.

There are a number of such stores in University Village. In addition to Bonobos, Plummer points to Amazon Books the online retailers first brick-and-mortar location which features curated selections of what Seattleites are reading, sometimes honed all the way down to ZIP codes of University Village shoppers; eyeglass phenomenon Warby Parker; and Oiselle, a local womens athletic apparel company that started online, then strategically grew into a multipurpose store and runners clubhouse.

Despite many stories that have predicted the death of brick-and-mortar retail, Phillip Raub sees a lot of reason for optimism. Hes president and cofounder of Bay Area technology retailer B8ta, which leases retail space to emerging online brands. It opened its second store in University Village in 2016, displaying new tech products that customers can try and buy.

Whats happening is a lot of legacy retailers are shuttering their doors because theyre not being able to adapt to the times, theyre not getting ahead of the technology curve, Raub says.

Retail is indeed undergoing a fundamental shift, asserts Raub, who worked at Nest and Nintendo before opening B8tas first Palo Alto location in 2015.

There are so many brands emerging that grew up online first, he says. Traditionally, if you were going to launch a product, you figured out how to get into a department store or a big-box retailer. Now, retailers can open a Shopify account and start selling online, but they also get to a point where they hit a ceiling.

Raub points to successful brands such as Casper, an online-only mattress company that is now opening stores and partnering with Target. They realize there are only so many Facebook ads you can do before youre going to hit a saturation point about who your target audience is. To have strong brand recognition and mass appeal, he believes online retailers eventually need to open retail stores.

Discovering a product, experiencing it, thats part of what a store does now, adds James Adams, whose Seattle-based design agency, 5ive Creative, partners with brick-and-mortar retailers to help them leverage their physical spaces.

Among them is Elliott Bay Book Company, a case study in retail design. Rather than blink in the face of encroaching Amazon Books, the bookstore has seen a 40 percent increase in sales since moving to a Capitol Hill space.

Stores like Elliott Bay Book Company use their spaces to connect with customers via knowledgeable staff, in-store displays and events. At Elliott Bay, cozy seating, reading tables and a cafe offer guests an opportunity to linger for hours.

All of this presents a distinct opportunity to engage with customers in an experience that still cant be replicated online, says Adams. Theres a way to create a stronger bond with your customer if theres a physical point where you get immersed in it.

He likens the process to online dating. Its great to email back and forth, but at some point, you really want to meet the person and exchange on that human level, and stores have that opportunity.

And like that first date, it has to be good and make you want to come back. A well-loved mascot just isnt enough.