This Boeing-Backed Company Is Planning to Make Electric Airplanes

Electric aircraft are going to happen. Kirkland-based Zunum Aero plans to make some of it happen here. 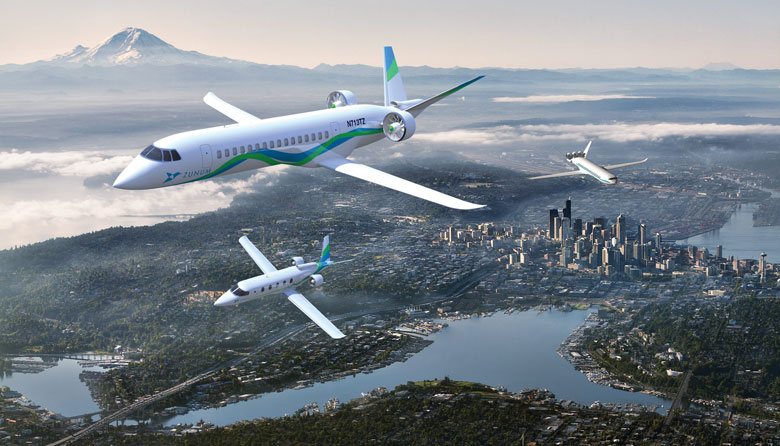 As experimental prototypes, electric airplanes have been around for decades. But the nagging question remains: Will they ever be commercially viable?

Zunum Aero thinks so. It has 20 full-time employees and 20 contract workers spread across facilities in Kirkland (software operations) as well as Chicago and Indianapolis (electric manufacturing and propulsion work.) The company recently received its first order from charter jet operator JetSuite, and it expects to employ about 100 by the end of this year.

Were in the middle of a hiring ramp, says CEO Ashish Kumar, who cofounded the Kirkland company with Mike Knapp. Their wives introduced them to each other after discovering that both husbands had an interest in electric airplanes.

Knapp, an engineer with a masters degree from MIT, had worked as an aeronautical engineer for two local plane design firms that had struggled financially. He was intrigued by the role electric planes could play in reducing greenhouse gases. Kumar was a former aeronautical engineering professor at Brown University who had worked as a consultant for McKinsey & Co. and moved to Seattle to handle global sales and marketing for Microsoft. He liked the idea of developing a hybrid-electric passenger airplane that could use traditional fuel as a backup.

The pair brainstormed the idea of a hybrid-electric passenger aircraft, then did deeper research on the business niche they thought looked most promising: small passenger planes serving small airfields less than a thousand miles from their hubs. These airports serve communities where the population isnt big enough to justify anything but the smallest passenger aircraft: Think Quincy, Aberdeen or Pendleton. (While larger conventional craft might be able to land there, theyd have too many empty seats to make regular passenger service feasible.) And while there are 12- to 20-seat planes serving some small towns, they are relatively rare. Just 140 hubs handle 97 percent of the nations air traffic to roughly 13,500 airports, according to Zunum Aero.

Knapp and Kumar believe small electric passenger planes will serve the smaller markets more economically because they are cheaper to fly. Electric jet turbines, even when combined with their batteries, are far lighter than fuel jet turbines and their liquid fuels.

Were very serious and pragmatic, Knapp says. [And] were more of a propulsion company designing an aircraft around a propulsion system.

Zunums initial aircraft design, the ZA-10, weighs 11,500 pounds when carrying 12 passengers, 800 pounds of emergency fuel and batteries capable of producing a megawatt of power. The plane requires only 2,500 feet of runway to take off. On the downside, it cruises at a top speed of 340 miles an hour and has an initial range of 700 miles, although that will later be extended to 1,000. By contrast, the Gulfstream IV and Cessna Citation X private jets carry up to 19 passengers and can fly faster and much farther. But because they weigh more than three times as much when fueled up, they require as much as a mile of runway to take off, preventing them from landing in many small airports. So, Kumar and Knapp saw an opening.

It was very hard at the beginning, Kumar admits. People were telling us we were idiots.

At the time, Tesla car batteries were catching fire, some in collisions and one in an auto mechanics shop. But the two founders remained convinced of the feasibility of a 12- to 20-passenger electric plane with a backup fuel tank. At that point, you couldnt walk away, Kumar recalls. You had to make it happen.

They founded Zunum Aero in 2013 and soon after obtained the first of several patents on their design. (Zunum, alternately spelled tzunuum, is the Mayan word for hummingbird.)

Kumar says Zunums small hybrid-electric passenger plane will be ideal for business travelers, regional cargo carriers and military organizations. He says Zunum is talking with potential customers, including several airlines, and admits it will take a couple hundred million dollars to see the project to fruition. Zunum has backing from the venture capital arms of Boeing and JetBlue Airways, as well as an $800,000 grant from the state of Washington.

Just like the auto industry is being transformed by electric cars, the regional airline industry is ripe for disruption by electric propulsion, says Bonny Simi, president of JetBlue Technology Ventures. After monitoring the space for a while, we believe Zunum is well ahead of others in efforts to transform the industry, and we are excited to have a seat at the table.

Our ability to identify, shape and harness game-changing innovations wherever they are developed is key to sustaining and growing our leadership in aerospace, Boeing CEO Dennis Muilenburg said last year upon the creation of Boeing HorizonX, an innovation enabler focused on accelerating potentially transformative aerospace technologies, manufacturing innovations and emerging business models. Zunum was one of HorizonXs first two investment targets.

Zunum aims to sell a handful of planes by 2022 and ramp up production after that. It does not disclose what it expects the price per plane will be, but does acknowledge a goal of eventually producing an aircraft capable of carrying 50 passengers.

There is no single secret to making an electric plane work, says Knapp, whose office on the second floor of a complex in Kirkand bears no company sign. The trick is having the right combinations of weight distribution, fuel load, aerodynamics, thrust, speed and other variables. A key design feature of the ZA-10 places the batteries inside the wings, with two turbines on the aft fuselage, similar to Canadair and Embraer regional jets. The fuel tank sits in the planes body.

Designing a plane with those characteristics required a complicated set of math and engineering computations. Zunums first patent covers multiple features, including the turbines, the wing-integrated batteries, control systems and recharging systems. The plane is designed to be battery agnostic, which means it will be able to use a wide variety of batteries so that a plane arriving at an airfield can simply have its batteries swapped out rather than wait for them to be recharged.

Zunum has a target of getting the ZA-10 to an operating cost of 8 cents per seat mile. Oliver Wyman, a New York-based management consulting firm, issued a 2016 report that put the average airliner cost at 11.5 cents per seat mile. Kumar says the average cost of operating a business jet is $2,000 an hour; Zunum is aiming for $250, and the ZA-10 would have minimal or no fuel costs for a flight.

While electric motors have been present through the 20th century in models and glorified gliders, it took the invention of the nickel-cadmium battery to enable the first full-fledged all-electric plane with a pilot the Militky MB-E1 to fly at an altitude of roughly 1,200 feet for 12 minutes in 1973. Succeeding years saw the development of a lot of single-seat and two-seat electric planes.

Today, several attempts are being made to develop all-electric or hybrid-electric passenger airplanes. Airbus, Rolls Royce and Siemens are working together on a prototype four-engine plane that would replace one engine with a two-megawatt electric motor by 2020. The consortium will work on replacing a second gas turbine and then more. (Airbus has already built a light electric plane, which flew across the English Channel in 2015.) The British airline EasyJet has teamed with the fledgling Wright Electric to build a passenger plane with a 300-mile range in the next decade. Israel-based Eviation is working on a nine-passenger electric airplane tailored for flights of 100 miles to 600 miles.

Zunum plans to fly its first test plane essentially, its batteries and electric turbines installed on an existing aircraft next year in Chicago. The first full-fledged prototype has a target test date of 2020.

One wrinkle Zunum must keep in mind is that technology evolves rapidly. Who knows what batteries will look like in five to 10 years? Knapp suggests. Designers must ensure the plane is robust enough to absorb new types of batteries, materials and equipment while remaining nimble as a hummingbird to pivot as needed.

This is a massive shift in the industry, Kumar declares. We have to figure out how it is going to play out.